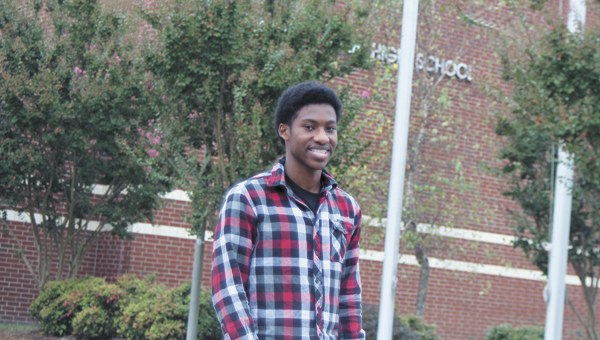 Nansemond River High School student Benjamin Littlejohn is a semifinalist in the National Achievement Scholarship Program. He hopes to be named a finalist, and ultimately win a college scholarship that will help him study mechanical engineering.

A Nansemond River High School senior hopes to share in $2.5 million worth of scholarship money after becoming a semifinalist in the National Achievement Scholarship Program.

Benjamin Littlejohn is the sole Suffolk student among 1,600 black American high school seniors named as semifinalists in the 50th installment of the annual program.

More than 160,000 high school juniors elected to participate in the program when they took the 2012 Preliminary SAT/National Merit Scholar Qualifying Test, according to a news release.

Littlejohn said he learned of his success in the last week of September. “They had kind of given me an alert in March last year that I had one of the top scores,” he said.

“(So) I wasn’t extremely surprised. I was very pleased. Hopefully, I can become a finalist.”

According to the National Merit Scholarship Corporation, which runs the program initiated in 1964 to honor academically high-achieving black students and provide a financial boost to many of the most promising, about 80 percent of semifinalists will be named finalists, and more than half of those will receive an Achievement Scholarship award.

Littlejohn said the application to become a finalist is due Friday. The detailed application includes “academic record, participation in school and community activities, demonstrated leadership abilities, employment, and honors and awards received,” the release states.

Littlejohn cited math as his strongest subject. “You get a definitive solution,” he said.

“On the other side, I really like history. I like the examination of how different things people have done … (have) affected humanity as a whole — how it leads to what we have today.”

Littlejohn says he’s looking for a liberal arts college where he can major in mechanical engineering. Last week, he toured Swarthmore College in Pennsylvania, declaring it possesses the rigorous academics he’s looking for.

He plans to apply for “a couple of ROTC scholarships,” which would mean serving in the military for a period.

Beyond that, he said, he’d like to further his education and land a research and development position.

Mechanical engineering is “more of a broad section of engineering,” he said. “You can adapt it to a lot of different problems; I like the flexibility to address what needs to be addressed, and impact humanity that way.”

At school, Littlejohn said he always strives to understand the curriculum, “not just memorize it for that brief period.”

He’s a drum major in the marching band this year, and previously was an alto saxophonist. He also plays piano outside school.

“In college, I’m definitely looking for a place where I can still explore music,” he said.