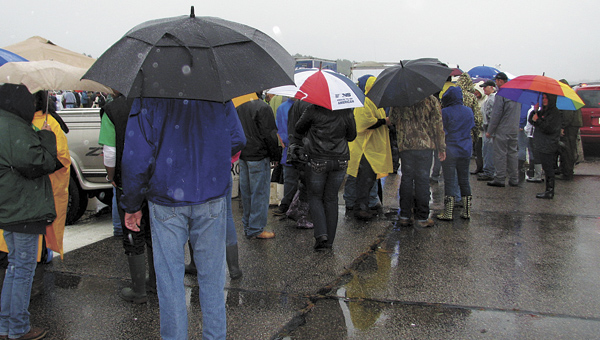 A line of soggy Shrimp Feast ticketholders stand in line for takeout plates after the Suffolk Ruritan Club event was canceled on Thursday.

Friday update: The Suffolk Ruritan Club is asking Shrimp Feast ticketholders who were not able to make it to the event to keep their blue tickets. The club is meeting next week to discuss possible solutions.

A gullywasher thunderstorm after several days of steady rain washed out Peanut Fest and the Shrimp Feast on Thursday night.

Lighting struck a Peanut Fest tent and a Shrimp Feast fryer, power was out to the Peanut Fest site, and the intersection of Airport and Carolina roads was flooded. Shrimp Feast subsequently had to close down.

“I want to have a Shrimp Feast so bad I can’t stand it,” said E.C. Harris, co-chairman of the Suffolk Ruritan Club event. “We did everything we possibly could do.”

Although the bands had canceled their performances, about 300 to 400 people were there the first hour of the event, Harris said. But then the storm came through, leaving a huge lake in the middle of the site and leaving the rest with an inch or two of water and mud. Organizers believed another storm was on its way. 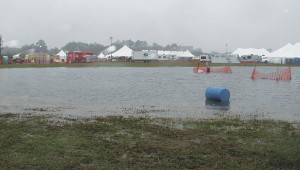 A lake in the middle of the Suffolk Executive Airport provided an illicit route to the closed Shrimp Feast for some who walked through it to get to the canceled event.

About 4 p.m., organizers stopped letting ticketholders into the Shrimp Feast and made it carryout only. People and vehicles lined up for takeout, and many were upset when they were told there would be no refunds. One woman tried protesting that the ticket did not say “nonrefundable.” Others said they would not return in future years.

“I don’t even know how I could go about giving out refunds,” Harris said, noting that many charities depend on the donations they get from the Ruritan Club each year. “Every dollar goes to local organizations and scholarships.”

In the 35 years of the event, the group has given away more than $1.4 million, he said. This is the first time it has ever ended early.

Suffolk Public Schools announced earlier on Thursday it had canceled the musical programs its students had intended to present on Friday at the festival.

“Student health and safety is a top priority,” division spokeswoman Bethanne Bradshaw wrote in an email.

Suffolk Parks and Recreation also announced its Gooberland youth activities set for Friday had been canceled because of the weather. Bingo has been moved to the East Suffolk Recreation Center, 138 S. Sixth St.

In addition, the Suffolk News-Herald will be unable to have its mobile newsroom at the site but will still cover the festival and its activities to the extent they happen.

The announcements came on the heels of strident and optimistic assurances on Facebook and through other media that Peanut Fest would go on, even in the face of heavy rain and the prediction of generally terrible weather through the weekend.

“We are not going to let a few ‘scattered’ showers over the next few days worry us,” festival organizers posted on Facebook on Wednesday. “Suffolk Peanut Fest is ON and it will be AWESOME! See you there!”

The National Weather Service forecasts a 60-percent chance of rain — up to a quarter-inch of it — on Friday, with a high of 68. The chance remains 60 percent on Saturday and drops to 40 percent on Sunday.