Peanuts in the rain 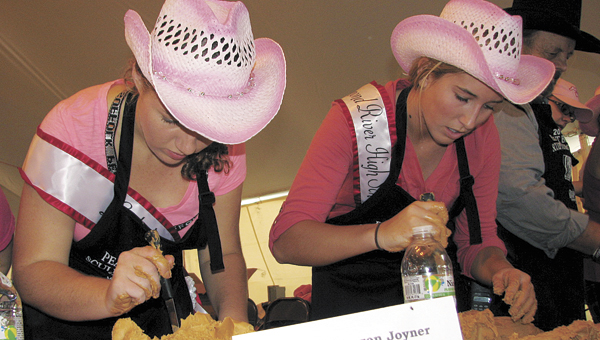 Lauren Joyner of Lakeland High School and Emily Leverone of Nansemond River High School, both representing their schools on the Peanut Festival Court, work on their peanut butter sculptures during the annual contest at Peanut Fest on Saturday. Leverone placed second with her horse sculpted of peanut butter.

Metzgar, who represents Suffolk Christian Academy on the 2013 Peanut Court, shaped her block of peanut butter into a depiction of peanuts holding an umbrella and surrounded by treble clefs and raindrops.

The nod to the classic 1952 Gene Kelly film “Singin’ in the Rain” earned Metzgar the blue ribbon in the contest.

“Rain isn’t going to stop anybody from coming out,” she said after her win was announced. 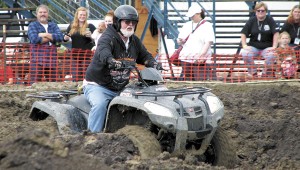 That was the theme of Saturday’s festival, which featured intermittent rain but mostly was just overcast. More and more people visited as the day wore on and folks realized it wasn’t raining all that much.

A new addition to this year’s fest, the ATV Mud Bog, proved popular and didn’t require as much water to be trucked in as organizers previously thought. Hundreds watched from the stands as contestants negotiated the course and sent mud flying.

“It just sounded like fun,” participant Jessie Sullivan said. “Everybody talks about me being an 18-year-old in a 59-year-old’s body.”

Sullivan said he doesn’t get to take his ATV out much, so the event was the perfect opportunity.

A recent transplant to Suffolk from New Mexico, Diane Hansen, said she read about the event in the paper and decided to participate. 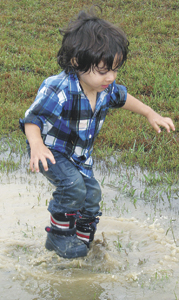 The aptly-named River Johnson, age 2, splashes in a flooded drainage area at the Peanut Festival grounds.

“We didn’t care about winning; we just wanted to do it.”

Besides the new mud bog, the rest of the celebration was the Peanut Festival folks have come to know and love for the last 36 years.

There were musical performances, carnival rides and games, vendors’ wares to explore, a petting zoo and pony rides, monster truck rides and, of course, the delicious food.

Musical performances scheduled for Sunday include the Steel River Band at 2 p.m. and Tate Stevens at 3:30 p.m.