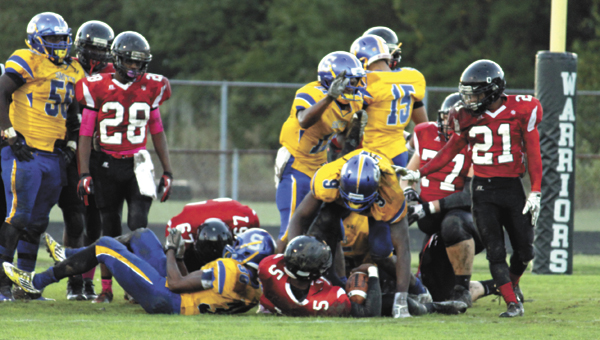 Nansemond River High School junior quarterback Jermaal Wells (5) begins to emerge from the mud after being brought down by an Oscar Smith High School tackler on Monday night. The Warriors hung with their opponents early, but the visiting Tigers soon put ample distance between the two teams on the scoreboard, winning 48-7.

Fans at Arrowhead Stadium were treated to a rare version of Monday Night Football when the Nansemond River Warriors welcomed in the Oscar Smith Tigers, a perennial powerhouse rated as high as No. 13 in the nation that came in riding a 60-game Southeastern District regular season winning streak.

Early on, there was hope and plenty of signs that the Warriors could hang with a program that has captured two state titles in the past five years. However, once the juggernaut from Chesapeake found its footing on the sloppy field, it rolled. Behind an aerial assault that saw the Tigers pass for 242 yards and six touchdowns, Oscar Smith went on to score 41 unanswered to break a late second quarter tie and defeat the Warriors, 48-7.

“We’re still learning how to do that, but the great thing about it is with the new format system of the playoffs, if these guys continue to grind and work hard, we’ll be alright. If we can gel at the right time, which I believe we’re getting close, we’ll be in a great position come November.”

For much of the first half, the host Warriors looked primed to possibly pull off a gigantic upset for the ages. They outgained the Tigers 65-49 in the opening period, drove 80 yards for a touchdown to tie the game late in the first quarter, forced Oscar Smith to punt on three occasions and even had the ball late in the second quarter near midfield with a chance to go ahead before half-time.

After Oscar Smith opened the game with a 50-yard touchdown pass on the second play from scrimmage, Nansemond River put together one of their finest offensive drives of the season. The Warriors turned three separate third downs into first downs and moved the chains a total of four times on the possession, including on fourth-and-26 when junior quarterback Jermaal Wells completed a screen pass for 33 yards to senior wideout Mel Giddens.

Wells capped the 18-play, 80-yard drive that took 9:50 off the clock with a touchdown from two yards out on fourth-and-goal. The Warriors then turned to their defense, which accomplished something that none of the four district teams that have faced Oscar Smith so far this season could do — make the Tigers punt.

Oscar Smith hadn’t punted in 38 days, since Sept. 6 versus Lake Taylor in a nationally-televised matchup. The Warriors not only made them punt, but they forced three consecutive three-and-outs, led by senior defenders Marvin Branch, Tracey Parker Jr. and Andre Butler. Branch finished with a team-high seven tackles, six solo stops and a sack.

With 2:27 before intermission, Nansemond River faced fourth-and-15 from their own 44-yard line. Coach Parker and the Warriors elected to go with a fake punt.

“Our thought process was they were coming to get us. They almost got the one before, and they just so happened to rough the punter,” Parker commented. “They called time-out, were setting up the block, so we were setting up our counter to the block and let’s hit them now. We’re at midfield and our defense has been playing pretty good.”

The maneuver turned out to backfire on the Warriors severely, resulting in a loss of two yards and turnover on downs. Things snowballed from there. Oscar Smith scored three touchdowns in a span of 2:07 to seize firm control and take a 21-point advantage into halftime.

“I felt like it changed the momentum of the game, but like I tell our kids, football is life,” Parker added. “There are good days, bad days, ups and downs, but the key is how you respond. We didn’t respond well.”

In the loss, senior tailback Latrell ‘Vegas’ Sandifer finished with 72 yards rushing on 22 attempts to bring his season totals to 923 yards on 109 carries. Wells completed six passes for 65 yards with four of those passes going to Giddens, measuring 54 yards.

Next up for Nansemond River (2-4) is a trip to city rival King’s Fork in another pivotal battle as they chase their first postseason berth since 1995.