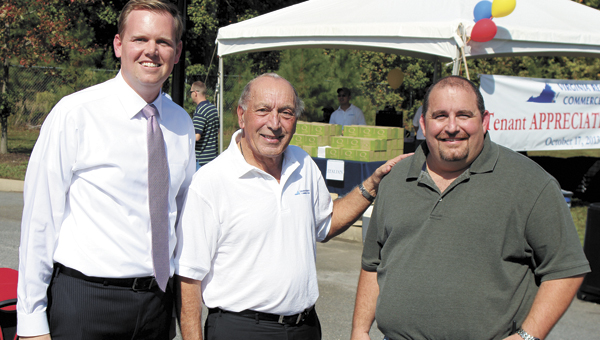 Virginia Regional Commerce Park held a celebration Thursday to show its appreciation to tenants that helped make the distribution and warehouse complex a success despite the recent tough economy.

Employees of the park’s tenants, which include Art FX, Best Brakes, Caspari, Massimo Zanetti Beverage and Sumitomo Machinery, were treated to box lunches.

Park developer Gus Miller said the project, which got under way in 2006 and has now resulted in almost 200 local jobs, came to a complete standstill when the Great Recession hit.

That’s the story shorthand, at least. Before they would extend credit to finish the project’s initial phase, Miller said, the banks wanted to hear from the early tenants.

“The tenants were extremely helpful,” he said. “The banks came in and they interviewed the tenants, asking questions like ‘How long are you going to be around?’ and ‘How strong are you?’”

As a result, he said, the banks felt comfortable enough to agree to keep the project on track.

“We just decided we wanted to have a tenant appreciation picnic and treat them all to lunch,” Miller said.

John Imbriale of contract textile screen printer Art FX, a two-year tenant, said the park has been “very accommodating. We appreciate everything they have done for us.”

Developing the commerce park has been new territory for Miller, who founded Miller Oil Company in 1977 when he bought Exxon Company USA’s home heating oil business.

Miller Oil Company began expanding into the convenience store and gasoline retail business in the 1980s, and its namesake stores now span from Virginia Beach to Manassas.

“When we found out the demand and the location — we did our homework — we thought we had to go for it,” Miller said of his commerce park foray in Suffolk.

The Virginia Port Authority also helped convince the banks to extend credit, he said, adding, “All the tenants here are bringing containers into the port.”

Located near the junction of routes 460 and 58, the 100-acre park has capacity for a further 1.25 million square feet of floor space, Miller said.