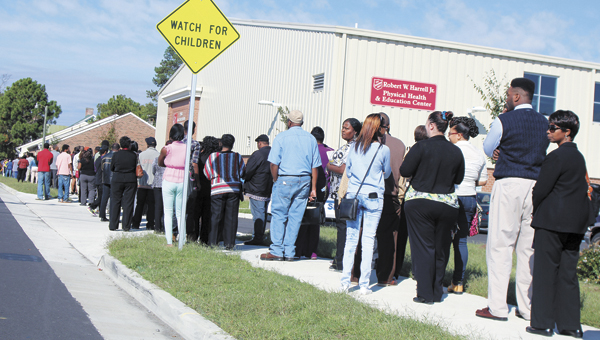 Hundreds of jobseekers line up to enter a job fair Friday at the Salvation Army building on Bank Street. Attendance at the event far outstripped what organizers were expecting.

A job fair Friday at the Salvation Army’s Bank Street area headquarters was swamped with jobseekers eager to get working again — often after years of waiting on the sidelines.

Jim Shiels, corps officer with the Salvation Army, said he was expecting a big crowd for the Suffolk Redevelopment and Housing Authority initiative from the beginning.

“But the turnout has just been phenomenal,” he added.

Four hours later, it stretched down the street past the Salvation Army’s new Physical Health and Education Center — which sadly couldn’t house the job fair because the floor remains incomplete, Shiels said — and around onto Liberty Street.

At 11 a.m., Murphy said 160 folks had already entered the fair, where 14 employers and employment agencies answered questions and collected stacks of resumes.

Somewhere near the end of the line, Kesha Boone declared, “I came out here because I need a job.”

Customer service or warehouse work preferably, she said. She has been on the hunt for “two or three years.”

Boone said she has been bringing in some money freelancing as a beautician, but lamented that the process of finding a permanent job “is a long one.”

“You have to try to compete with people with degrees,” she said, and “they want the utmost experience. … It’s a matter of just continuing applying.”

Jessica White, who wants work as an office assistant, said she hasn’t had any luck since graduating this year from King’s Fork High School.

“It’s been hard looking for a job because nobody will give me a chance,” she said, adding she has applied for more than 100 jobs since June.

Michael Smith, a resident services coordinator there, said the housing authority decided to sponsor the event after sensing the demand for jobs. “We expected at least 200, but I think that number may have doubled,” he said.

According to preliminary U.S. Bureau of Labor Statistics figures, Suffolk’s unemployment rate stood at 6.5 percent in July. It had fallen to 5.7 percent in April.

“Clearly there’s a need for jobs,” Shiels said. “We were phenomenally pleased that so many people came out to take advantage of this. I’m sure we are going do another one in the spring.”

Adding to the profusion of people and cars — “We were joking that we caused the first traffic jam in Suffolk for 10 years,” Shiels said, and police had to direct traffic — was a Foodbank of Southeastern Virginia truck.

The bank’s Sarah Ellis said while the regular food distribution event typically serves about 275 households, providing about 30 meals to each, at least 320 were served Friday.

The idea was to provide free, healthy food — along with recipes and the chance to speak with a dietitian — to folks who are “food insecure,” she said.

“We’re really targeting folks who are already managing diet-related conditions — diabetes, high blood pressure, heart disease — or who are at risk” of developing them.

Meanwhile, the job fair was also supported by Dress for Success, providing professional attire and other assistance to economically disadvantaged women, and the city’s Workforce Development Center, which critiqued resumes.