Former Georgetown University and King’s Fork High School basketball star Sugar Rodgers did not have to wait long to see her first title after being drafted into the Women’s National Basketball Association in April.

Though she saw little playing time on an already talented Minnesota Lynx squad, she still made contributions to the team, which swept the Atlanta Dream for its second title in the last three years. 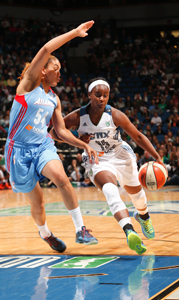 Former King’s Fork High School star Sugar Rodgers of the Minnesota Lynx drives into the paint against Atlanta Dream guard Courtney Clements. Rodgers’ minutes were limited as a rookie on a talented team, but she and the Lynx recently claimed the franchise’s second WNBA championship. (Photo submitted by Alex King)

“It was an amazing feeling just coming in the WNBA as (a) rookie (and getting) a ring on my first try,” she wrote in an online interview on Tuesday. “Some people don’t win rings their whole career. Even though I didn’t play much, it was still fun and a great experience.”

After being able to take minutes for granted as a key player for the Bulldogs and Hoyas, Rodgers said it was a mental challenge at first to adjust to limited playing time, but she learned from it.

“I learned that even when you’re on the bench, you still can help the people out on the floor,” she wrote. “That didn’t stop me from working hard. I was in the gym, before and after practice, working on my game.”

She recently returned home to visit family and took the opportunity to serve up a real treat for local youths at the East Suffolk Recreation Center.

“I got all my teammates to donate their old and new shoes so I could give them away to kids who may not be able to afford basketball shoes,” she wrote.

She said the idea popped into her head during her time with the team.

“I just asked my teammates because I was wondering what they were going to do with all the shoes,” she stated. “So, donating to some kids who need them was the best idea.”

While local, Rodgers spent time unpacking from her time with the Lynx, but then packing up again for a trip to Israel, where she currently resides. She will remain there until March, playing as the starting shooting guard for the Hapoel Rishon Le-Zion basketball team.

Playing overseas is common for WNBA players during the off-season. However, this is Rodgers’ first time out of the country, and she said it is quite different there.

“It’s hard to go grocery shopping because mostly everything is Hebrew,” she wrote. “My teammates and coach speak English good enough so you can understand.”

Water and soda taste different than in America, she said, but she got used to it after a while.

The weather has been enjoyable, and she wrote she “can’t wait to visit some of the things mentioned in the Bible.”

While being abroad offers up obvious benefits, Rodgers saw how it puts home in a new context, as well.

“I think it’s a great experience (to) visit another country because you get to see how blessed you are living in the States,” she wrote.