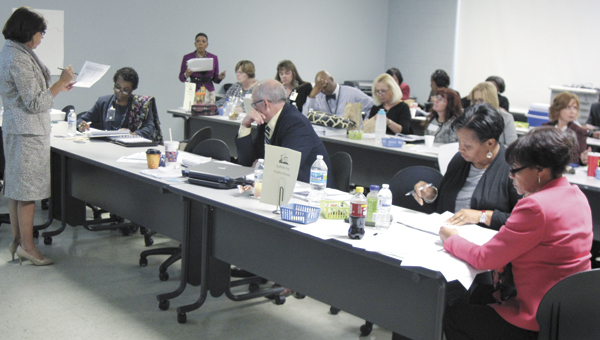 Officials from Suffolk Public Schools and four other surrounding divisions attended training Tuesday on a new set of academic review tools for schools and divisions being rolled out across the state.

Districts will use the tools to evaluate how well their written and taught curricula in schools accredited with warning are aligned with state standards, said Yvonne Holloman, associate director with the Virginia Department of Education Office of School Improvement.

“We are teaching them to use a rubric,” said Holloman, who led the daylong session at John F. Kennedy Middle School alongside education consultant Becky Grant.

One of six training sessions across the state, the Suffolk session was attended by a minimum of three people each from Suffolk, Portsmouth, Southampton, Isle of Wight and Franklin school districts.

They’re especially useful for districts suddenly finding themselves with schools missing full accreditation after a number of years with a clean bill of health, she explained.

With the phasing in of new Standards of Learning assessment methods with increased rigor, the percentage of Virginia public schools accredited with warning has increased substantially in recent years to 22 percent, or 395 schools, in 2013-2014.

This year, Suffolk Public Schools has gone from two to six schools accredited with warning.

Holloman explained, “Think of going to your physician each year and passing with flying colors. Last year, your physician changed one of the tests so now there is an area of deficiency you need to work on. So we are going to give you some tools that will help you diagnose what the issues are and address those issues.”

The tool operates at the district level and the school level, she said.

The rollout of the academic review tools is not linked to a new teacher evaluation policy introduced this year as part of Gov. Bob McDonnell’s education reform package, state education officials say. Rather, it aims to help districts adjust schools to tougher testing standards toward increasing the number of fully accredited schools.

The tool “has nothing to with teacher evaluation, nor will it be used to assess effectiveness,” says Kathleen Smith, director of the Office of School Improvement. “It is only a set of tools to check for alignment” of curricula with state standards.