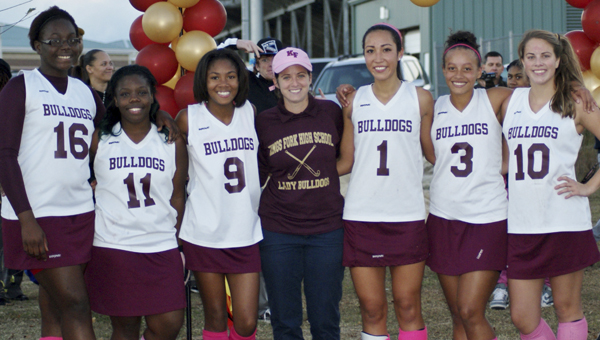 The King’s Fork High School field hockey team hoped to improve on its four-win season from 2012 or perhaps finish above .500. With a 2-0 home victory on Wednesday evening against Smithfield High School, the Lady Bulldogs did both, finishing the regular season with a 9-5 record.

“From what I understand, it’s the best season that King’s Fork has ever had,” head coach Courtney Van der Linden said. “So, I feel accomplished.”

Wednesday was also senior night, serving up an emotional occasion for soon-to-be-graduates on the King’s Fork squad, who were playing on their home field for the last time.

“We did play pretty hard, considering it would be our last home game, especially the six seniors,” said senior team captain Kana Hashigami.

The coach described everything Fiel did on the field as “pretty much spot on,” and also highlighted senior Chiamaka Akujuobi. “Her poise and control of the defense just continues to ‘wow’ me,” she said.

King’s Fork (9-5, 3-2) finished third in the Ironclad Conference for the regular season. For the first round of the conference tourney, the Lady Bulldogs will face Heritage High School on Tuesday at Christopher Newport University.