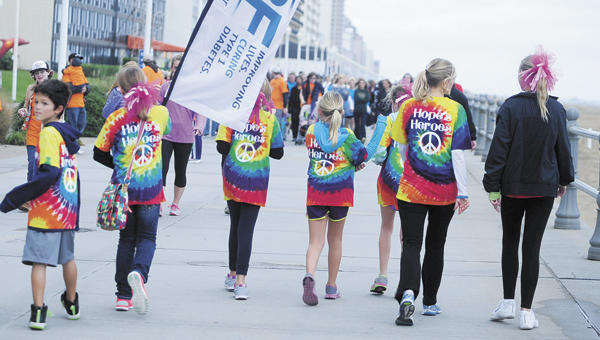 Hope Carr and other members of Hope’s Heroes lead the way at the Virginia Beach JDRF Walk to Cure Diabetes last weekend at the oceanfront. Hope was diagnosed with Type 1 diabetes earlier this year.

The Virginia Beach JDRF Walk to Cure Diabetes last weekend at the oceanfront was led by a Suffolk family that is hoping for a cure for Type 1 diabetes.

Hope Carr, a 10-year-old who was diagnosed with the disease this summer, was at the head of the procession of more than 1,500 people. She got the privilege of carrying the flag, because her team, Hope’s Heroes, raised the most out of any team in the event.

“It was really good and emotional for her to see everyone there,” said Hope’s mother, Heather Carr. “It was kind of a big deal.”

Carr registered for the walk from a hospital room at Children’s Hospital of the King’s Daughters back in July, shortly after Hope was diagnosed. She later created the team, which raised a total of $13,500 and also placed second in the T-shirt contest at the event.

Carr said she noticed that Hope, who attends Nansemond-Suffolk Academy, was losing weight toward the end of the last school year. She also was very thirsty and even was getting up in the middle of the night to get water.

Carr chalked the symptoms up to a growth spurt and the heat of summer. But when she picked her daughter up from camp one day and saw dark circles under her eyes, she knew there was something wrong with her.

“They’re all little things, but when you put them all together they add up to something,” said Carr, adding that Type 1 diabetes does not run in their family. “It was kind of shocking.”

After a doctor’s appointment, Hope was immediately admitted to the hospital, where she stayed for three days and was quickly diagnosed with Type 1 diabetes.

Type 1 diabetes occurs when a person’s pancreas stops producing insulin, a hormone that enables the body to get energy from food. Its causes are not yet entirely understood, but scientists believe both genetic factors and environmental triggers are involved, according to the Juvenile Diabetes Research Foundation.

To manage her disease, Hope has to test her blood sugar about 10 times a day and give herself insulin shots four times a day. She also has to keep track of what she eats.

“It’s a lot for a child,” Carr said. “Hopefully they’ll find, if not a cure in her lifetime, a better way to manage it.”

Carr said Hope was encouraged to see so many friends and family supporting her at the event.

“She felt very happy, and she felt loved,” Carr said.

The team had about 50 members, she said.

The walkers went two miles on the oceanfront, from 31st Street to 17th Street, and wound up at Neptune Park. A variety of activities and food was available at the party.

Carr said Hope is doing well and is playing soccer at school this year.