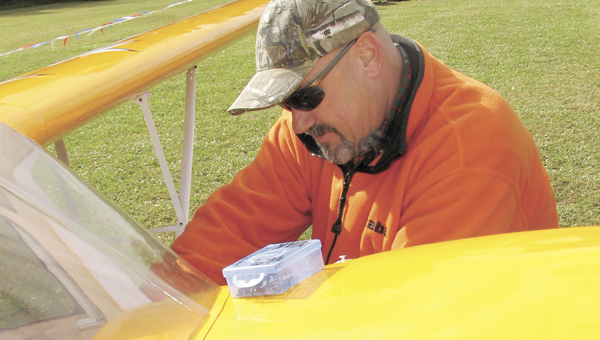 Bill Coada was one of about 60 pilots to visit the Hampton Roads Radio Control Club’s 2012 Fun Fly, benefiting Toys for Tots. The 2013 event is on Saturday.

The Hampton Roads Radio Control Club will officially kick off the Toys for Tots campaign in Suffolk with an action-packed event at its Chuckatuck airfield Saturday.

2013 Fun Fly activities at the Lone Star Lakes airfield, off Pembroke Lane, begin at 8:30 a.m. with the raising of the colors, said Mills Staylor, the club’s vice president and event organizer.

“That will be followed immediately by the pilot’s meeting,” he said. “We go over the field rules and safety rules.”

This year marks the event’s seventh consecutive year. The club’s primary annual charity event started when a club member, who was also a Marine, suggested the U.S. Marine Corps’ campaign to provide toys for needy children at Christmas was a worthy cause, according to Staylor.

“It started off small … and it’s been growing every year,” Staylor said.

At the event, children will have the opportunity to fly radio-controlled planes using what are known as “buddy boxes.”

Trained pilots get the planes into the sky before the novice takes control, and pilots can intervene to correct any serious mistakes.

Louis Radwanick of Mid Atlantic Biplanes restored the aircraft from the ground up, Staylor said.

At noon, several skydivers from Skydive Suffolk will drop in. They’ve been collecting toys at Suffolk Executive Airport, Staylor said, and will fall — then float — through the air with bags of toys for the campaign.

Pilots participating in the event must either pay a $10 landing fee or donate a new toy of comparable value, and while there is no entry fee for visitors, folks are asked to arrive with a cash or toy donation. All proceeds will benefit Toys for Tots.

Another highlight is the candy drop, Staylor said, and one club member plans to also drop balsa gliders.

Food and beverages will be free, though folks are welcome to pay with a donation, and raffles and drawings are also planned.

A model plane valued at $750 is the major prize, Staylor said, and a 30-minute biplane ride will also be raffled.

“A couple of other smaller radio-controlled planes will be in the packages,” he said.

The actual flying starts at 9 a.m., and the event runs through about 4 p.m.