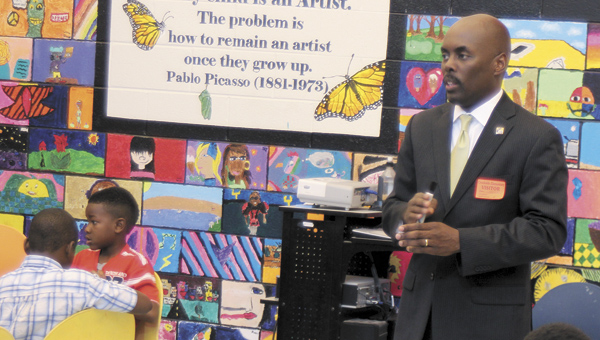 Teachers select boys to join the club, which meets once a week before school starts to discuss life-improving topics, sponsor Jesse Ellison said.

Whitney, a former elementary school teacher, told the boys how they could improve their lives by setting goals that are “specific, measurable, achievable, relevant and time-bound.” SMART, for short.

Whitney mostly adhered to a question-and-answer format, testing the students’ understanding of his subject.

“Who knows what I mean when I say ‘goal?’” Whitney asked. “It means something you achieve or are working for,” one boy replied, pleasing the superintendent very much.

Before asking the boys to write down their own goals, Whitney related a goal of his own.

“My goal is to go to the gym to work out more often,” he said, adding, “The problem with that goal, though, it is not a SMART goal.”

While gradually refining his goal, Whitney explained each component of SMART.

Eventually, his goal became to attend the gym six days a week for two months.

“It’s going to push me, because in the past I have only gone five days a week,” he explained.

The boys were invited to state the goals they had devised for themselves. They included: “To run around the world, and build a house,” “Continue leading my soccer team,” “Get my first win during the baseball season,” and “To get all A’s all year.”

Latrail Marshall’s goal was the most closely aligned to the guest speaker’s. “My goal is to get my calf muscles built,” Marshall said.

Whitney was peppered with assorted queries when he opened the floor to general questions.

What did he study in college to get his job? Did he play sports? Was he the first person to create schools in Suffolk? Did he always want to be a superintendent?

“No, I wanted to be a teacher,” Whitney answered to the last one.

The boys wore button-down collars, neckties, vests and polished shoes. They were on their best behavior, stating their full names before intoning questions.

“Stepping up” is the Breakfast Club’s theme this school year, Ellison said, adding the boys always look forward to the superintendent’s annual visit.

“It even inspires me as a teacher,” he said.