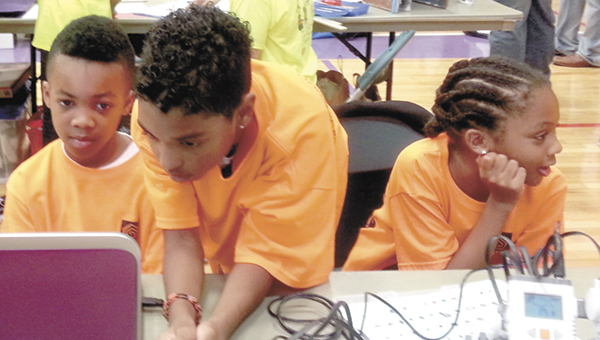 One team, THE Team 2.0, which was started last year for children in North Suffolk ages 11 to 14, won a first-place trophy in the Robot Design category and placed third overall in the competition hosted at Crittenden Middle School, according to Lou Pollard, a parent of one of the students involved.

The team, which is not affiliated with a specific school, now advances to the regional contest at James Madison University on Dec. 7, Pollard said.

“The vast majority of other teams were sponsored by public school funds,” Pollard said in an email. “Our team does not qualify for state or local aid, because three of them attend a private school (Isle of Wight Academy), one is home schooled, and one is in the Suffolk school system.”

Meanwhile, Mack Benn Jr. Elementary’s Amazing Marlins, also a second-year team, scored a first-place trophy in the Core Values category, according to Elizabeth Petry, a gifted resource teacher at the school and one of four team coaches.

The team will not advance to the next round, but students were “very happy” with the outcome, Petry said, adding, “Our actual robot mission didn’t go as well as we had hoped.”

As well as designing Lego robotics and completing tasks on an obstacle course, the competition also has a research component, requiring team members to work together on a real-world problem.

This year’s Challenge topic is nature’s fury, and Pollard said THE Team 2.0 students contacted meteorologists at the National Weather Service office in Wakefield, as well as Jim Judkins, Suffolk’s emergency management coordinator, after selecting hurricanes as their issue topic.

“Based on their research, they determined that an issue in our area is that many residents have become complacent and do not prepare or make a plan ahead of time,” Pollard said.

The students created a short video, uploaded on YouTube, around the theme of “Get a Kit, Make a Plan, Stay Informed,” to encourage folks to plan for storms and remain safe when they hit.

Meanwhile, Petry said the Marlins are working on a database concept that would allow folks to search for family and friends after a natural disaster. Team members plan to present it to the Suffolk Police Department, she said.

“As we get more exposure, that just builds the program,” she said.