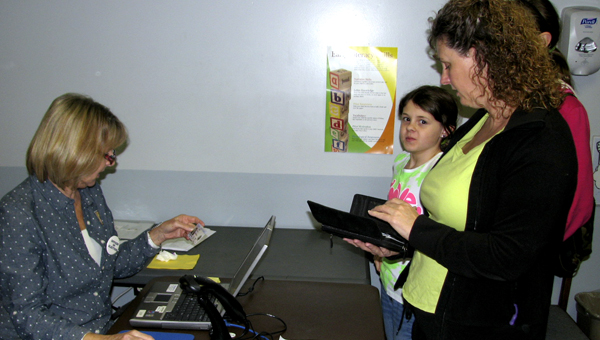 Election official Cynthia Winslow checks in voter Julie Lucas, who brought daughters Lauren and Olivia with her to vote at the Lakeside precinct at Morgan Memorial Library.

By Matthew A. Ward and Tracy Agnew

Just after 9 a.m. at the Virginia Modeling, Analysis and Simulation Center, polling location for the Huntersville precinct, voter turnout was at a steady trickle. Unlike 2012’s presidential election, no one was waiting in line.

“It’s going good so far,” reported Sharmane Baynard, the precinct’s chief election officer. “Voter turnout has been smooth. There was a wait when we opened at 6 o’clock. It’s been steady (since).” 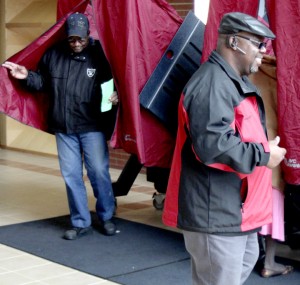 James Brumley emerges from a booth after voting, while Daniel Brown makes for a booth to cast his ballot, during voting Tuesday at the Virginia Modeling, Analysis and Simulation Center, polling location for the Huntersville precinct.

She said she cast her vote for incumbent Raleigh H. Isaacs Sr. “He’s been keeping our community safe,” she said.

Daniel Brown said the election for governor was most important to him. “It’s important to all of us,” he said.

Outside the building, volunteers handing out literature on behalf of candidates seemed to outnumber voters.

But one volunteer, Ashley Lambert, handing out for Jennifer Pond, a challenger for sheriff, maintained she had gotten a good response. “The majority of the people said they were going to vote for her (Pond),” she said.

Abner Ferebee said he was “doing my duty” by voting. He said the election for governor “is, I guess, in my mind important, but all the rest are just as instrumental.”

At downtown’s Lakeside precinct, the Morgan Memorial Library, Barbara Morris said she came to vote because she can.

“I came out to vote because it’s a privilege to vote,” she said. “There are so many people out there that can’t vote.”