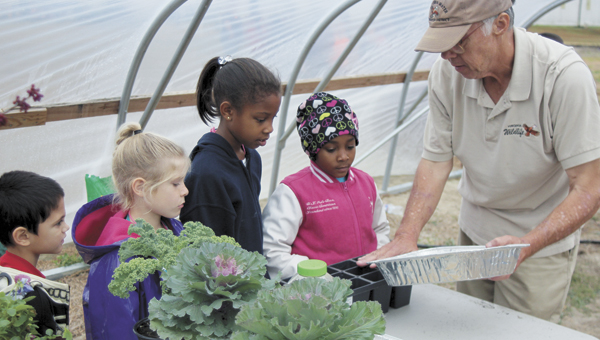 Eric Henderson, Madison Pismeny, Mya Langston and Makiya Underwood of Southwestern Elementary School learn about growing plants in a greenhouse from Bob Glennon, who works for Virginia Tech in Smithfield. The students were among all second-graders from city schools to attend Farm Day at the Virginia Tech Research Farm on Hare Road Wednesday and Thursday.

A field trip to a real working farm Wednesday and Thursday enlightened Suffolk’s public school second-graders on the first segment of the farm-to-plate concept.

Her organization was among several to make the 10th annual Farm Day a success, she said. Others included the USDA’s Natural Resources Conservation Service and Farm Service Agency, Virginia Cooperative Extension, the Virginia Department of Forestry, and Virginia Tech’s Hare Road research station, where the field trip was held.

“It takes an effort from all the agencies to put this thing together,” Outland-Williams said. 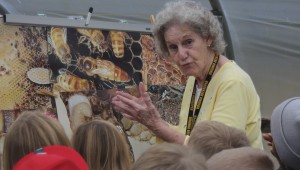 “We do this so the kids have a chance to come out to the farm to see what goes on at a farm, because many of the kids don’t (otherwise) have a chance (to do so), and to teach about agriculture and conservation.”

The field trip started with class photos in front of a tractor. Students then circulated through the stations, spending 10 minutes at each and learning about a diverse range of topics, all of them connected to farming and the land.

They set up a soybean to germinate in a moist cotton ball, learned about the different layers of soil and how they’re formed, made a cup of edible “soil,” and were schooled on environmental issues.

Students also made artworks by pouring different locally grown grains into a jar, peeked inside a beehive, and, from Virginia Tech’s Bob Glennon, learned about growing produce indoors.

“Usually, when farms grow things inside a greenhouse, they don’t water the whole greenhouse; they have what they call trickle irrigation,” Glennon told Brenda Mills’ Southwestern Elementary class.

“They seem interested, and it’s hands-on for them,” Mills said. “It’s much better than when they are in the classroom.”

But it wasn’t only students learning at Farm Day; many of their parents attended as volunteers.

Shannon Patrick, mother of Booker T. Washington Elementary student Vincent Patrick, said the students were interested and excited about “seeing the goods and what they turn into.”

It was Patrick’s first time on a farm, she said. “He loves it.”

Outland-Williams said the students keep learning Farm Day lessons at home by taking projects, such as the soybean germination kit, away with them.

They also pass the lessons on, she said. “They show their parents what they learned.”

Farm Day was funded with a Violet H. Greco Foundation grant to the Suffolk Education Foundation, according to school district spokeswoman Bethanne Bradshaw.