The top-seeded boys’ volleyball team at King’s Fork High School took on No. 2 Heritage High School on Thursday to decide which would be Ironclad Conference 18 tournament champions.

“All in all, I think we played very well,” said KF head coach Joseph Burns, who was recently named conference Coach of the Year for boys’ volleyball. 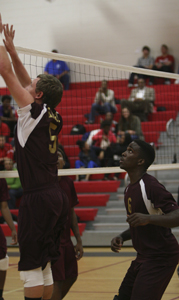 The one major hiccup came via the second game loss when Burns said the Bulldogs received first and the Hurricanes were able to build up a lead off of good service.

“Heritage is a good team,” he said. “They have some players that can really hit the ball.”

“We were able to disguise our hits a little bit better toward the end, I guess, and our big guys really came up strong with blocks,” Burns said.

He added, “The two Roscoe brothers had their best night of the season.”

Burns said a key to King’s Fork’s strength this year is its multiplicity of offensive threats.

“In years past, we only had one or two strong offensive people to go to, but this year with the players that we have, we can have a very balanced attack,” he said.

Reacting to the Coach of the Year honor, Burns said, “I’m, of course, very pleased. I’m ecstatic about it.”

He deflected a good deal of the credit to his assistant coach, Angie Gatling. Between the two of them, he said, “I think we made a very good team.”