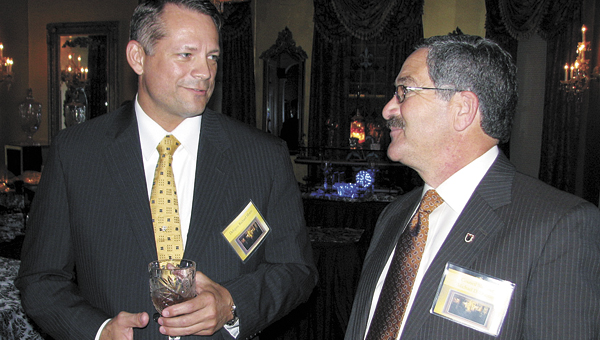 Delegate Rick Morris (R-64), left, and Councilman Mike Duman chat before the commencement of the city’s annual legislative dinner at the First Lady on Thursday.

Other priorities in the community college system may put a damper on the city’s plans to study the feasibility of combining its new library with Paul D. Camp Community College classrooms and resources, state lawmakers signaled Thursday.

City and college officials are bullish on the concept of combining resources in the proposed two-story building near the intersection of West Washington and Lee streets and were asking lawmakers to get the state to initiate a feasibility study. But legislators were cautious.

“If you want to have the state involved … there’s a lot of projects that are in front of it,” Delegate Chris Jones (R-76) said. “You have to get in line, and it has to be a priority.”

Preliminary plans for the new library include classrooms and library resources from both the city and the college, as well as a café, genealogy center and local history museum.

Other legislators, such as Sen. John Cosgrove (R-14), questioned whether a non-taxable building would be the best use of land in the downtown core.

Deputy City Manager Patrick Roberts believes the new building will encourage investments into private buildings and blight removal, which would help recover the lost revenue. In addition, the site of the current Morgan Memorial Library, a former furniture showroom, would be sold and put back on the tax rolls.

Other legislators questioned the wisdom of moving college resources away from the rural area from which it draws many students. Roberts noted the Kenyon Road campus is already a satellite of the main one in Franklin and that the college may be happy to move to a more densely populated area.

“What’s growing up around them now, they’re in an industrial area,” Roberts said.

Councilman Charles Parr said he envisions one day moving the college’s entire campus downtown and getting rid of “the blight and the substandard housing” in the neighborhoods to the south of West Washington Street.

Another topic that prompted discussion during the meeting was enterprise zones, which are designated by the state and afford economic incentives for companies to bring jobs into a depressed area. The city hopes to see legislation passed that would qualify localities for the zones based on the demographics of certain census tracts, not the locality as a whole.

But an effort to do so last year met with resistance from localities that currently have enterprise zones and don’t want to lose them. A work group has been formed and is being led by Delegate Matthew James (D-80).

“We will meet before the session, and my hope is we can come up with a consensus,” he said. “We’ll keep working on it, because it is a valuable program.”