In the path of ‘progress’ 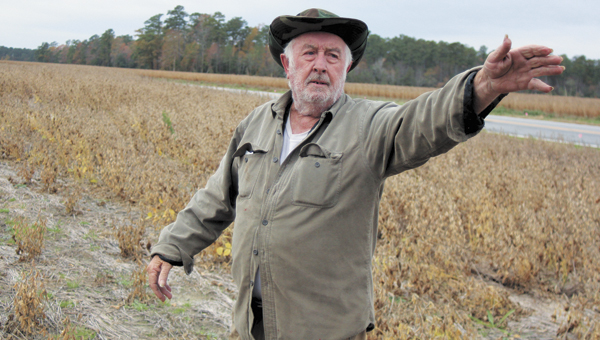 Ivor farmer L. A. Brantley Jr. stands where a new road proposed by VDOT as a tolled, limited-access alternative to the existing Route 460 would cut through the land he says has been in his family since about 1900.

The 75-year-old farms land in Ivor he says has been in his family since the turn of the last century, starting with his grandfather.

“It will come right through the middle of my home farm, about half a mile from my house,” Brantley said recently, pointing out where he believes the Virginia Department of Transportation’s preferred route will send endless tractor-trailers careening through his peaceful fields.

Brantley says the road would take 50 acres of his land, including 17 acres of cultivation and the balance valuable timber, as well as one house.

He would be reimbursed for his land. And he could harvest the timber before the government got its hands on it. But he’d rather keep his 1,500 acres intact, he says.

“There’s a lot of people, they don’t care about the family farm,” he said. “I’m interested in preserving it just like it is.”

Brantley and others like him are closely monitoring a tense situation that has developed between VDOT and the U.S. Army Corps of Engineers, which, under the Clean Water Act, must issue a permit for the road project’s destruction of wetlands.

VDOT has come under fire for advancing its plans despite the corps’ insistence that it provide more convincing proof that the benefit justifies the environmental cost and that any path cut through woods and farmland causes the least amount of damage possible.

Late last month, the Southern Environmental Law Center jumped on new information released by VDOT showing the road’s design corridor would impact about 3-1/2 times the amount of wetlands — 474 acres according to the recent estimate — than previously thought.

According to Trip Pollard, a senior attorney with the center, the “shocking” new estimate, taken together with the project’s other perceived flaws, “now completely overwhelm its limited benefits.”

The corps and the Environmental Protection Agency were concerned about wetlands even before the new estimate, and losses would be more than several other transportation projects scrapped due to wetlands concerns, he noted.

VDOT and the corps disagree on why wetlands impacts have increased. Estimates, first calculated with aerial National Wetlands Inventory maps and “limited ground verification,” were revised up because the corps changed what it considers a wetland as well the methodology for calculating impacts, VDOT spokeswoman Tamara Rollison said.

Also, she added, US Mobility Partners conducted further field analysis after being selected as the project’s private partner in October 2012. “The footprint of the project hasn’t changed,” she said.

Alice Allen-Grimes, the corps’ Route 460 project manager, said an update to the federal agency’s manual for identifying wetlands results in a “very small percentage of change.”

“The initial wetlands impacts were based on the National Wetlands Inventory Maps, which are very broad and often not on target,” she said. “We are still not sure what transpired between 2005” — when, she says, the corps told VDOT it needed to supplement maps with ground studies — “and 2012.”

A portion of the $192 million of taxpayers’ money spent on the project so far went to gathering information for the permit application that the private partner lodged with the corps Sept. 30, Rollison said.

At the very least, to assess whether the new road meets the public interest test, the corps now requires a supplement to the environmental impact statement, to document the increase in wetlands impacts, the effects of tolling and making it an interstate-style limited-access road — both additions to the original, publicly exhibited plans — and why the earlier alternative of improving the existing road doesn’t meet the project’s purpose and need, Allen-Grimes said.

VDOT has changed its original proposal for the existing 460 alternative, which the corps stressed could be an environmentally friendlier option, from a widening to five lanes to expanding the road to eight lanes.

With combining tolling and free access — a key part of the project — and adding bypasses around communities like Brantley’s Ivor, it now reports that remodeling the existing road would destroy more wetlands and cost twice as much — $2.8 billion — than building a new road alongside it.

“They have indicated that the alternative in the original EIS of improving the existing road doesn’t meet the purpose and need, (but) we need to document why it doesn’t and what has changed,” Allen-Grimes said.

R.M. Felts Jr., another Ivor local whose farmland would be cut in half, says he sees the need for the new road.

“I’ve lived here all my life and been driving the road for 50-plus years, and it’s a very dangerous road,” Felts said.

“We need the road, but I hate to see it come through my property; it’s going to be a major impact on the life we have known.”

No right-of-way acquisitions have yet been authorized, according to Rollison. VDOT says remodeling and tolling the existing road would potentially mean up to 364 residential and 20 business relocations, nearly quadruple that of its preferred new road.

Virginia’s outgoing governor, Bob McDonnell, has pushed the project, saying it will maximize benefit to the commonwealth from the Port of Virginia, provide an evacuation route for Hampton Roads, be a strategic asset for the military, and take trucks off the existing 460, improving safety.

Allen-Grimes is not so bullish. “The more impact, the more benefit should be apparent,” she said. “We have a ways to go in looking at the benefit of this project.”

Standing in his field skirted by the woods he played in as a boy, Brantley hopes some kind of miracle stops the road from bisecting his land.

“I haven’t slept for the last two years worrying about this damn mess,” he said. “It just changes my way of life. I wouldn’t be surprised if I see my daddy come up here out of the cemetery when they start on this road.”