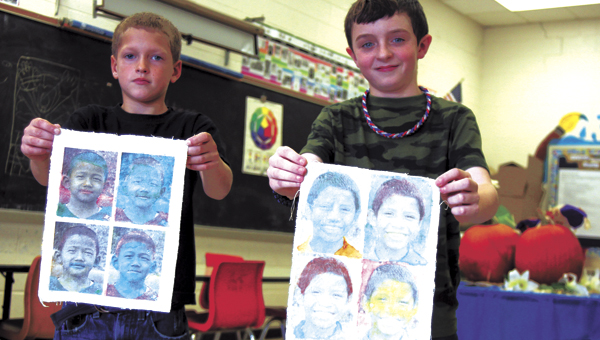 Owen Blanton and Nathan May, fourth-graders at Elephant’s Fork Elementary School, hold up portraits they created of Nepalese children as part of a nationwide project providing mementos of childhood for kids around the world who have been neglected, orphaned or disadvantaged.

Talented art students at Elephant’s Fork Elementary School have created images of less-fortunate children that will be treasured as rare mementos of childhood for years to come.

Ben Schumaker developed The Memory Project while studying social work as a graduate student at the University of Wisconsin.
While volunteering at a Guatemalan orphanage in 2003, he had learned that some kids have few meaningful mementos of childhood, such as photos.

Since Schumaker started the project in 2004, it has created nearly 50,000 portraits for kids in 34 countries, created by art students after receiving photos of the kids via mail.

“I tell my students, if I wanted to see a picture of them when they were 6 months old, their mother or grandmother would probably have one,” said Meredith Kerr, the talented art teacher leading Elephant’s Fork Elementary School’s contribution to the project by seven students in grades four and five.

“This is a way of giving them those memories.”

The Elephant’s Fork students were mailed photos of Nepalese children, from which they created portraits using a photo-transfer technique and watercolors.

“Usually high school students do this, but I wanted to give my students an opportunity,” Kerr said.

Students created the portraits on canvas, which Kerr said would be more durable. “I don’t know the situation the children are living in, and with paper, over the years they would get destroyed or ruined,” she said.

Students first selected their photographs then spent about 24 hours transferring them to canvas, she said. They worked on the actual painting for two days.

Fourth-grader Owen Blanton said, “It makes me feel good that I actually made a project for them.”

The students are perhaps too young to fully understand the difference they would make in the lives of other children around their age, Kerr indicated.

“I showed them a map of where the children live,” she said, adding the Elephant’s Fork children all come from “different backgrounds and different situations — they are going to view the world in seven different ways.”

Kerr said she wants art at school to be about more than working on a project for 40 minutes then taking it home.

“Art is all around them, and I want them to see that,” she said.

The portraits are mailed back to the children in Nepal inside protective plastic sleeves, with the message, “This portrait was created especially for you! We hope that it will be a fun gift for you to receive, and that you will enjoy this keepsake for many years to come.”