‘They are very resilient’ 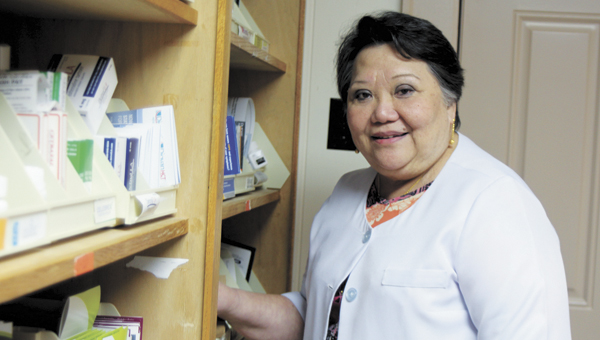 Rise Faith Dajao, a doctor in Chesapeake who lives in Suffolk, emigrated from the Philippines to the U.S. with her husband in 1973.

Since Typhoon Haiyan devastated her native Philippines last week, what little sleep Rise Faith Dajao has gotten has been fitful.

The Western Branch family physician, who lives in Suffolk, has been up nights using social media and text messaging to learn the fate of family and friends, or waiting for sleep to calm her mind.

“My husband had high-school classmates in the most affected area and just heard from one of them early this morning,” she said Wednesday.

“He’s safe with his family, but there is one that we have not heard from. The waiting is difficult. My husband had a nephew also in the area; it took us about 2-½ days before we heard from him.”

Dajao and her husband emigrated together from the Philippines in 1973. They are among a sizeable community of Filipinos in Hampton Roads; many others came here as wives of American servicemen who had visited the Pacific archipelago nation.

Rather than helplessly watch the devastation on the cable news networks, many are raising money for their former homeland.

Dajao is among them, urging support of a dinner-dance the Cebuano Speaking Association of Tidewater — whose members speak the dialect of her native island — is planning for Nov. 22 at Virginia Beach’s San Lorenzo Spiritual Center, 4556 Indian River Road.

Tickets for the event from 6:30 p.m. are $20 at the door. Dajao says a couple of Filipino dance groups have been asked to perform, and there also will be line dancing alongside the traditional dancing, plus karaoke, a popular Filipino pastime.

Dajao said the fundraiser was initially planned for the deadly magnitude-7.2 earthquake that rocked central Philippines 24 days before Friday’s typhoon, which was one of the most powerful storms ever recorded, killing nearly 2,400 as of numbers reported Wednesday.

“On our island, Cebu, the earthquake had caused damage in the south,” she said. “But with the typhoon, most of the damage was in the north. Ninety percent of the homes lost their roofs, but, thank God, there was not much loss of life.”

Most deaths occurred in several cities on the island of Leyte, including the devastated Tacloban, where the Dajaos have friends.

“One friend lost his aunt in the storm surge,” Rise Faith Dajao said. “He has not heard from his cousins.”

Her three sisters and four brothers in Cebu are safe and accounted for, she said, but with all the connections and potential for bad news, sleeping has been difficult.

“It’s been kind of nightmarish,” Dajao said. “We don’t get to bed until maybe one o’clock,” after reading and watching news updates and surfing Facebook.

“It takes a long time to get to sleep, then it’s disturbed. It’s tough to see all that.”

The Waray Waray Association of Tidewater is organizing another fundraising dinner-dance in Virginia Beach, from 6:30 p.m. on Nov. 29 at the Philippine Cultural Center, 4857 Baxter Road, with tickets also at the door for $20 each.

Dajao said her group is accepting donations for victims. Checks made out to Cebuano Speaking Association of Tidewater can be sent to 4556 Indian River Road, Virginia Beach, VA 23456.

“The Filipino psyche, if you look at them, it doesn’t matter how difficult the circumstances, they bounce back,” Dajao said. “They are very resilient.”

Friends and family have even been sending gallows-humor jokes, she added.

“They have a very wonderful sense of humor. They will get over it.”