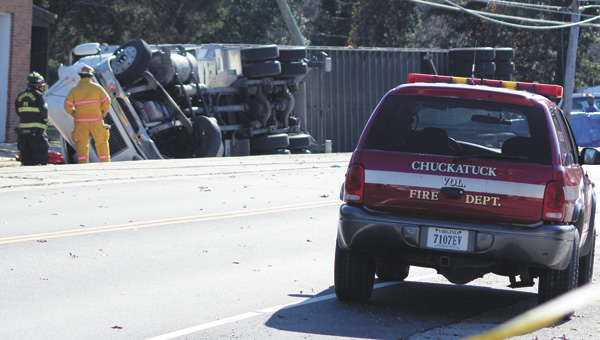 Emergency workers clean up a hog truck accident on Godwin Boulevard in Chuckatuck on Friday afternoon.

A North Carolina man has been charged during the preliminary investigation into a tractor-trailer accident that blocked Godwin Boulevard in Chuckatuck for about seven hours Friday morning and early afternoon.

Antonio Marquez, of Goldsboro, is charged with reckless driving and failure to maintain control. He was not injured, city spokeswoman Diana Klink said in a press release.

The preliminary investigation indicates the truck was traveling northbound when it ran off the road about 7:24 a.m. in the 5900 block of Godwin Boulevard.

The truck was hauling hogs from Goldsboro Hog Farm, Klink said. About 180 hogs were on board, and about 80 died as a result of the accident, she said. None escaped from the trailer.

Representatives from Murphy-Brown, the livestock production subsidiary of Smithfield Foods, did not return calls on Friday. They have said in the past that animals that die in crashes are processed into non-food items such as oils and greases.

Suffolk Fire and Rescue personnel secured the fuel leak at the scene.

Making matters worse, the exit ramps from Route 17 to Route 258 in Carrollton were blocked around the same time after a separate crash.