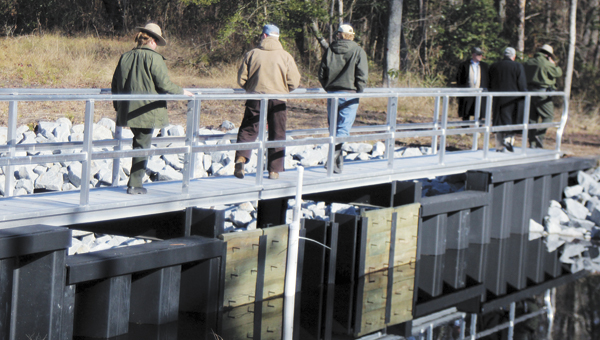 By adding and removing flashboards, two new weirs control the flow of water into a section of the Great Dismal Swamp via the South Martha Washington Ditch.

A short distance apart on the South Martha Washington Ditch canal, across the North Carolina line, the weirs will add more water to 9,500 acres of the swamp, said project manager Will Smith, a U.S. Fish and Wildlife Service biologist.

The steel structures extend up to 75 feet into the ground so that the “flashboards,” which are added or removed to change the water level, much like the spillway in a dam, can withstand the immense pressure pushing against them from upstream, Smith said.

Officials and environmentalists want to re-wet the swamp, drained for logging in the 18th and 19th centuries with a network of ditches, for several reasons.

Loggers were after the prized — now globally rare — Atlantic white cedar, which they felled and removed whilst leaving other less-desirable trees such as red maple, according to Smith.

Still, prior to Hurricane Isabel in 2003, the swamp supported the largest remaining stands of the cedars, experts say.

Isabel decimated the trees because logging activity had eroded the soil, according to Smith. “This soil loss made it easy for Hurricane Isabel to blow down the remaining Atlantic white cedar stands,” he said.

“Then, the two greatest fires our generation had ever had in the swamp” — in 2008 and 2011, the latter charring more than 6,500 acres — destroyed most of what little remained.

It is hoped that by making the swamp wetter, the cedars might make a comeback, which would be beneficial for biodiversity, including more than 250 different bird species.

Rob Atkinson, a biology professor at Christopher Newport University who has been leading field classes at the swamp for years, says the peat that forms there stores large amounts of carbon. When fires occur, it’s mainly the peat that burns, releasing the carbon into the atmosphere. Adding more water would stop this from occurring, he said.

One of Atkinson’s students, Justin Weiser, estimated in a thesis that the weirs dedicated Wednesday will stop the annual emission of 4.63 million tons of carbon — what one car would emit after journeying 48.65 billion miles, Atkinson says.

Atkinson and others also believe the wetter environment will have a positive effect on mercury levels by encouraging the growth of more mercury-storing trees and resulting logs. High mercury levels in swamp and feeder waters have resulted in fish-consumption advisories and impacted birds through the processes known as biomagnification, where mercury levels increase further up the food chain.

The two new weirs, which together he dubbed “the Hoover Dam of the Great Dismal Swamp,” bring the total number of so-called water-control structures there to 42, refuge manager Chris Lowie said.

“We have identified about an additional 35 structures in the refuge to still give (more) water-control capability,” he said.

Lowie said six weirs were installed in the past year, including the two new ones. “We have been successfully getting funds through our partnerships to do this work,” he said.

One more structure was required for the center of the refuge east of Lake Drummond, he said, while a $3-million federal grant in response to Superstorm Sandy — technically earmarked for flood control and abatement as opposed to environmental concerns — will be focused on the northern part of the refuge.

Joy Greenwood, superintendent of the state park, said a grant for $180,000 that came in last year would fund three more structures on the North Carolina side, as well as water-monitoring wells.

Wells monitor how well the structures work, Lowie said, explaining, “Whenever someone gives you one and half million bucks, they want to know how it works out. They are going to track the impacts on the water table.”

Lowie said the two parties will soon ink a lease agreement putting one weir, which impacts a section of the swamp within the refuge whilst being located in the state park, in the hands of the refuge, whilst the state park will manage the second weir. The agreement will include a water management plan, he said.

The state of North Carolina also contributed to the project with land-protection agreements, said Bridgett Costanzo of the fish and wildlife service.