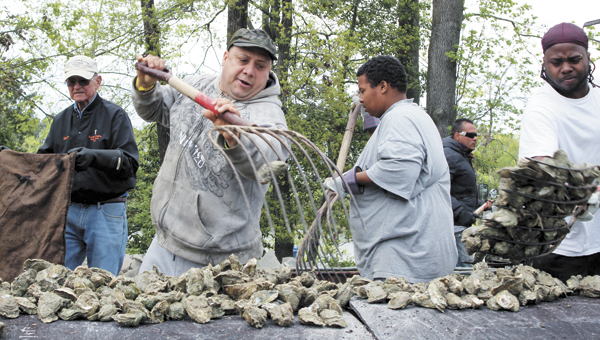 A longtime annual event that never tires, Chuckatuck Ruritans are once again gearing up to bring together delectable, fresh-roasted mollusks and cold beer for their fundraising oyster roast.

This year’s event — the 38th — will be held at the usual location of Kirk Farm, off Everets Road, on April 9.

From around 3 p.m., with the first oysters to be served up at about 4 p.m., old and new friends alike will come together for fine dining and camaraderie, according to the Chuckatuck Ruritan Club’s Dwight Bradshaw.

Jerry Saunders, an organizer of the event, said 200 bushels of oysters had been ordered, and 120 gallons of clam chowder would be cooked up.

Saunders said that the late Bill Harvell, one of the original members of Chuckatuck Volunteer Fire Department, created the recipe.

“Clams, bacon, potatoes, onions, green bell peppers — that’s the basis of it,” according to Saunders. “They eat almost all of the 120 gallons.”

Clam chowder would begin to be served a half-hour before the oysters, he said, and folks are encouraged not to show up before 2 p.m., when the gate off the road will open.

“There’s no need to go there any earlier than that,” he said. “You will have plenty of time.”

The event pretty much sold out each year, Bradshaw said, adding, “If people need tickets they need to contact people (or visit one of the listed outlets) pretty soon.”

“We have great community support for it,” he continued, “especially the fire department — they are a great help.”