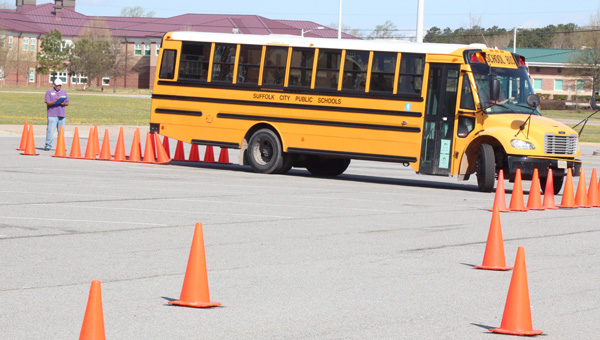 During a school bus rodeo at King’s Fork High School on Saturday, Michelle Woods nudges some traffic cones as she backs down a “chute,” while James Blow Jr. judges her skills.

“It’s really just for the drivers to come out and have fun and show their skills,” she said. “It helps brush up their skills as well.”

Seventeen of the district’s 146 or so drivers, along with two from Portsmouth, parallel parked, backed into a narrow “chutes” hardly wider than the buses, drove with their dual wheels straddling tennis balls and negotiated a mock railway crossing, among other skills.

On a course marked out with traffic cones, they did so in transit, conventional and special-needs buses, representing three categories of competition.

“The two hardest (obstacles) are the back-up and the parallel parking,” McLamb opined.

Points were to be tallied at the end of the day, she said, with prizes in each category. Among many sponsoring business, she listed Amerigas, Unilever, Chips Wrecker Service, Walmart and Triple-T Gymnastics as the biggest contributors.

Paula Smith, secretary in the transportation department, said it was also a “family-fun day” to which the bus drivers could bring their children — who made good use of a bounce house.

The association sold condiments to raise money for the annual scholarships it offers to one female and one male senior. “We are trying to get $500,” association Vice President Mary Chandler said.

Vernice McMillan, a competitor, said, “We just want to do well. Anything you do, you want to be on top.”

Another competitor, Shelly Boose, president of the association, said, “It’s not a test, it’s having fun.”

District Chief of Operations Kevin Alston said the event demonstrated that the association was “proud of what they do. They have worked hard to put this together.

“The public can come and take a look at what these bus drivers do on a daily basis.”