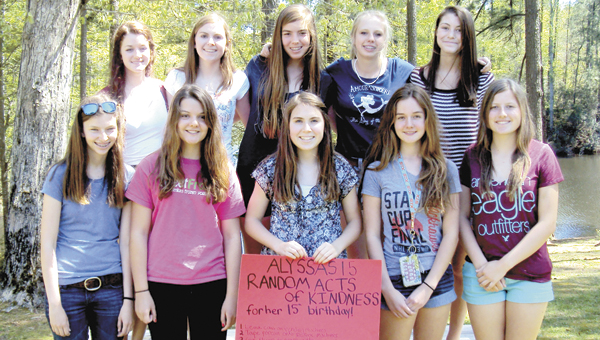 Suffolk residents from Chuckatuck to downtown benefited recently from the kindness of a 15-year-old and her friends.

Alyssa Rose, whose birthday was Wednesday, celebrated on Saturday with her sister and eight friends. But instead of getting gifts, she gave to the surrounding community.

“Usually, for your birthday, you do something that’s all about you,” she said. “I thought, why not this year invite my friends to do nice things for people around Suffolk and Smithfield?” 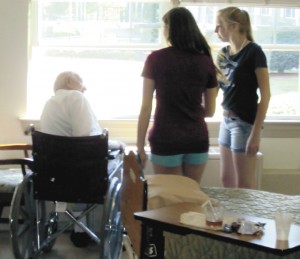 Alyssa, who attends ninth grade at Smithfield High School, got the idea from an activity she completed on a mission trip to New York last year.

She made a list of the 15 random acts of kindness she wanted to do for her 15th birthday. They included putting bags of popcorn on Redbox machines, leaving inspirational notes on public bathroom mirrors, taping coins to vending machines, placing flowers on graves at the cemetery, taking flowers to nursing home patients and cookies to the employees, and concealing uplifting notes in their favorite books at the library.

Alyssa has been planning the party since September. She invited the girls to her home for a 1 p.m. celebration without telling them what the party entailed.

The girls spent an hour and a half making and preparing things and then hit the road in three cars, with Alyssa’s parents, Anne Wright and Rusty Rose, and stepmother, Chrystal Rose, as chauffeurs.

“My friends are very creative, so they came up with some really nice things,” Alyssa said. “They were pretty excited. It was just a great experience to make different people happy.”

Alyssa said people they met were “surprised I was actually doing this for my birthday and not just having to do it.”

One little boy and his father at a local frozen yogurt store “were just so excited” when the cashier informed them the girls had just bought them a gift card, Alyssa said.

Her parents said they were not surprised that Alyssa chose to give back to others for her birthday.

“I don’t think she fully understands the impact of what she did, and of course she’ll never know,” said her mother, Anne Wright. “It was just emotional that she had actually done it and just to see how people from all different aspects were touched.”

Wright said she heard a man at the nursing home who had just received a flower say, “It’s just like a holiday, getting a flower from you.”

Alyssa’s father, Rusty Rose, said his daughter always tries to give back.

“It’s just the type person she is,” he said. “Alyssa seems to see things in other ways. That’s what makes her who she is.”

He said he tries to impress upon his daughters that they need to stand out from the crowd — in a good way.

“I always tell them, being out front is a whole lot better than being in the back,” he said. “You’ve got to decide in your life how you want to go about it.”

Besides volunteering, Alyssa also is the field hockey manager at school and is in Beta Club. She’s also involved in the youth group at Westminster Reformed Presbyterian Church.

Other things she and her friends did included taking bubbles and balls to kids and leaving inspirational messages in chalk at the KidZone Park behind Farm Fresh in Suffolk; hanging up inspirational signs around town; taking crayons and coloring books to Sentara Obici Hospital; leaving flowers and cards on cars in parking lots; leaving dollar bills hidden in the Dollar Tree store; and leaving rocks on the ground with inspiring words.