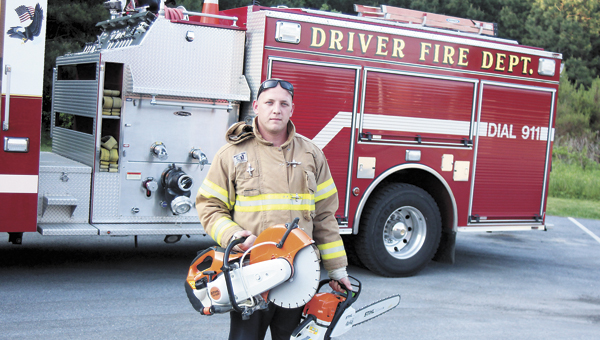 Outside the Driver Volunteer Fire Department building Tuesday, Lt. James Gray shows two saws Stihl donated after he wrote the company a letter. They will be put to good use, he says.

About two weeks ago, Lt. James Gray and two others from the department traveled to the company’s Virginia Beach plant to take possession of a quick-cut saw and a chainsaw.

Together, the machines are worth about $2,300, said Gray, vice president on the department’s board of directors.

“The equipment that we had was old and needed replacing, so I wrote them a letter,” he said.

“They contacted me back and said they don’t have exactly what we expected, but they had some stuff they could give that was pretty close.”

When they went to Virginia Beach to pick up the saws, the Driver VFD volunteers were given a tour of the plant and taken out to dinner.

Since getting the saws back to the department building, the volunteers have had some in-service training to learn how to use them, Gray said.

“There are many different uses for stuff like that,” he said. “You can cut a hole in a roof for a ventilation hole. If something falls on somebody, you can get them out. If a tree’s down across the road, you can clear it.”

Gray went to Stihl first because its equipment is of the highest quality, he said, adding, “Everything that Stihl makes is made right here, in Virginia Beach.”

“They are going to last a long time,” he added.

According to Gray, organizations like Driver VFD have to solicit donations or go without after city budgets were cut.

“We don’t have any money to go out and buy what we need,” he said. “Everything we do here at Driver is one-off donations and fundraising.”