In her sophomore season, the former King’s Fork High School standout led the Golden Bears in batting average, home runs, hits and doubles, and she tied for the team lead in stolen bases and walks. 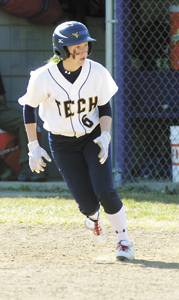 Suffolk’s Megan Blythe runs the bases in one of the latter games of her phenomenal
sophomore season at the West Virginia University Institute of Technology. She earned the USCAA First Team
All-American honor for the second straight year. (James Holloway and Dr. Deb Beutler photo)

And, as in her freshman year, she was named a United States Collegiate Athletic Association First Team All-American.

“I said at the beginning of the year that was my goal; I want to reach that level again,” Blythe said of the honor. “And at the end of the year, this year, I said, ‘I’m going to try and go for all four years, First Team All-American.’ That’s a huge stretch, and I don’t know if anybody’s ever gotten that before, but I’m definitely going to try to accomplish that in the next two years.”

Golden Bears coach Amber Affholter stated in an email that Blythe “has the potential to be one of the best softball players to graduate from WVU Tech.”

Blythe showed her potential in a variety of ways this year beyond just her offensive statistics.

“Megan stepped up in the classroom, as well as on the field,” Affholter stated. “She had the highest GPA and led by example. She started out at second base for us, then played third base and outfield, while finishing the season as one of our top catchers. Overall, she was a great asset this year and will continue to help mold our program into a positive direction.”

WVU Tech only won two games early in the 2014 season but later improved, going 8-6 in its last 14 contests.

Blythe was pleased with her hitting, but saw clear room for improvement in her defensive performance after transitioning out of left field, where she played as a freshman. 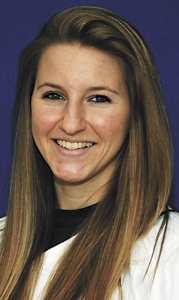 “I played second this year for the first time, and I caught a little bit, and I haven’t really caught since high school, really, so I had to get comfortable catching again,” she said.

Nevertheless, her overall success has commanded respect from voting members of the USCAA, her peers and her coach, the latter of which has given her an altogether unexpected opportunity.

Affholter will coach a team representing the United States for a 10-day stint in Italy next summer, and Blythe will be going along.

“I was able to hand-select 14 girls who I believe will be successful playing overseas,” the coach stated, and Blythe was one of those girls.

“I was in complete and total shock,” Blythe said.

She has already begun to raise her own funds for the trip, as each girl is required to do.

For Blythe’s junior season at WVU Tech, Affholter stated, “I am looking forward to see how many girls will look up to Megan and want to be as good as she is.”