‘Going away party’ for crime planned 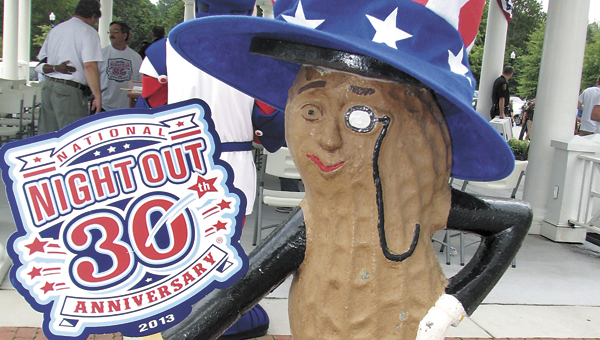 Mr. Peanut was prepared for National Night Out at the Suffolk Visitor Center Pavilion last year. This year’s event is set for Aug. 5.

Folks around Suffolk will join together to “give crime a going away party” at the annual National Night Out celebration on Aug. 5 this year.

The National Association of Town Watch produces the annual event, which enjoys participation by more than 37.8 million people in all 50 states, U.S. territories, Canada and U.S. military bases worldwide.

The event is meant to encourage citizens to take ownership of their communities, to forge connections with their neighbors and to partner with local law enforcement to make neighborhoods safe, as well as to present a united front against criminals.

In Suffolk, thousands participate at dozens of sites across the city every year. Most of the parties are in neighborhood parks and at local businesses and include food, entertainment, children’s activities, community resource information and visits from local law enforcement and elected officials.

“Suffolk was once again honored for the wonderful involvement of our citizens in 2013 and received the highest honors from the National Association of Town Watch for any city in the state of Virginia, and we were the only city in Hampton Roads to finish in the Top 5 in their population category,” said city spokeswoman Diana Klink. “In fact, we continued our award-winning tradition, and earned our eighth national Top 5 finish in a row after judging. With everyone’s help, we can bring the first place trophy back to our city.”

National Night Out celebrations nationwide are judged based on a video and notebook of documents related to the event that are submitted after the event. In addition, community judges compare the neighborhood-level celebrations and award certificates after the event, as well.

A kickoff meeting for the event will be held June 24, from 6 to 7 p.m. at City Council chambers, 441 Market St. Guests will be able to register their neighborhood or group, get important information about National Night Out and register to win a banner to use at their event.