A heart for the hungry 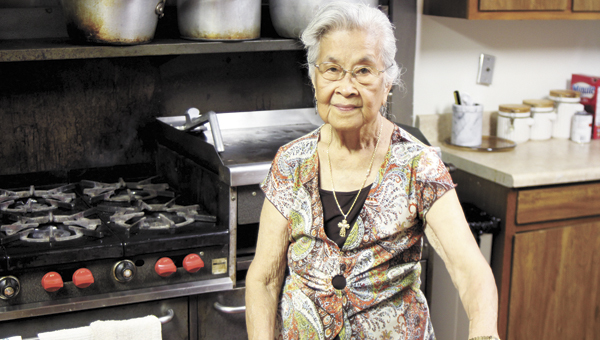 The kitchen inside the old Salvation Army building on Bank Street is familiar territory for Magdalena Barnes, 85, who has led the soup kitchen efforts of Suffolk’s four Episcopal churches for 25 years.

Magdalena Barnes, 85, has led the soup kitchen efforts of Suffolk’s four Episcopal churches for a quarter of a century, and she plans to continue as long as she can.

Barnes said she initially got her own church, St. Mark’s, involved after visiting the Salvation Army soup kitchen one day.

“I came down here, and I saw people eating,” Barnes said Wednesday at the Salvation Army’s old Bank Street building, where that transformative experience occurred.

Back then, Barnes said, the clients had soup and a sandwich. “I just watched them eat,” she said. “It seemed like they really enjoyed it.”

Barnes said that when she was asked if St. Mark’s could contribute to the effort, she replied that while the church couldn’t afford to participate every Saturday, it could do so on a less-frequent basis.

That’s when the enduring relationship began. The other Episcopal churches, Glebe, St. John’s and St. Paul’s, all got involved as time went on and need increased.

On May 17, Magdalena Barnes was honored for her long and crucial service to the soup kitchen during an appreciation luncheon at the Salvation Army building.

Barnes was appreciative of the surprise formal recognition, but said she has never made out to other people that what she does is any kind of a big deal.

“For 25 years, we did it without letting anybody know what we were doing,” she said.

The on-duty church supplies volunteers and food, she said, while the Salvation Army supplies the dining area and kitchen in Bank Street, along with disposable cups, plates and utensils.

It’s held every Thursday and Saturday from noon to 1 p.m.

The churches “are a godsend,” Johnson said. “They are not afraid to step up. I would say they are the backbone of the community, because of what they do.”

In May, 583 clients were served 687 meals, according to Johnson.

Among them, 86 volunteers from four different churches provided 254 hours of service, she added.

For Magdalena Barnes, rallying the troops is no trouble, according to her daughter, Margaret Barnes.

“She calls all the other churches and reminds them when it’s coming,” Margaret Barnes said. “She comes to every single one and coordinates everyone.”

The sailing isn’t always completely smooth. One time, Margaret Barnes said, there was no meat for the main meal.

“They put a call out, and everyone went out and started buying every piece of fried chicken they could find,” she said.

Magdalena Barnes said, “I almost had a heart attack. I said, ‘Lord, I can’t take all these people to McDonald’s to feed them. Please don’t do that to me again.’”

Magdalena Barnes chairs her church’s outreach committee, which does much more in the community besides supporting the soup kitchen.

Though she uses a walker to get around now, after a stroke four years ago, asked how long she intends to continue coordinating the Episcopalians’ soup kitchen efforts, Magdalena Barnes said: “As long as I can. I enjoy it. The Lord is taking care of me.”