Suffolk Pawn and Gun plans a soft opening June 28 and hopes to formally open by the beginning of July, Erwin said. 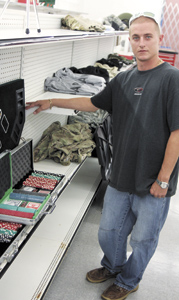 Ronnie Hamilton Jr., manager of Suffolk Pawn and Gun, shows some poker sets in stock at the store. The new store will open in North Suffolk by July 1.

Ronnie Hamilton Jr., who says he has more than 10 years of experience in the industry, will manage the pawn and gun store, in the Food Lion shopping center on Bridge Road.

He said he would buy or pawn “anything of value that we can resell.”

“We have got guns to sell, we have got jewelry to sell, musical instruments, tools, sporting goods. We’ve got a little bit of everything,” he said.

The store will be stocked with 30 different types of handguns when it opens, Erwin said, adding that in time the selection would expand, including into long guns.

Erwin said that she and the store’s other owner share ownership in another pawn store in downtown Suffolk.

“The (other) store was doing so well we wanted to branch out into other areas of Suffolk, because there wasn’t really anything out in the north part of Suffolk,” she said.

Work a while in the pawn industry, and one soon learns a little about a lot, according to Hamilton.