Nansemond River High School’s boys’ soccer team was well-represented among the All-4A South Region accolades, and the Warriors were led by their decorated senior team captain.

Gabe Everette followed up his Ironclad Conference Player of the Year honor by making the all-region first team as a forward. 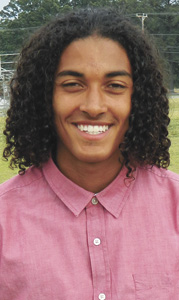 “It was an honor,” he stated in a text message. “I’m extremely happy and grateful to be recognized for what I was able to bring to the team this season.”

Warriors coach Dustin Tordoff was pleased to see another honor come to Everette this season.

“He was the top player in our conference, I feel like he completely deserves the first team all-region combination,” Tordoff said.

Tordoff campaigned for him at the coaches meeting where the all-region teams were formed by vote, but he had help. Nansemond River played regional foes Tabb High School and Jamestown High School during the regular season and faced Grafton High School in the regional semifinals.

“We had representation from their coaches having seen Gabe play,” Tordoff said. “It wasn’t a hard ‘sell.’”

Among forwards, Everette was the third top vote-getter of five selected to the first team.

Everette produced 16 goals and 17 assists this season to help the Warriors have a season of unparalleled success. They went 12-6, reaching double-digit wins for the first time. They had their first championship game appearance, they made the regional playoffs for the first time and got their first playoff win.

And though Everette is being recognized appropriately as a strong offensive player, Tordoff actually had him transition to a defensive role at the regional level.

The coach knew his team would be playing on a larger field in the regional quarterfinals against Woodrow Wilson High School. Since Tordoff usually employs a three-man defense, he also knew he needed someone who could effectively cover that ground to help protect the goal.

“He was the choice,” Tordoff said of Everette.

The coach’s confidence was a testament to Everette’s versatility and also to the depth on the Warriors’ roster this season.

“Our offense is still very good with moving him back,” Tordoff said. “We didn’t lose too much.”

“Everybody was very impressed with the way that they played when we played against them,” Tordoff said. “It was really exciting for four of my younger kids to get second team all-regional honors, because we still have a very good region.”