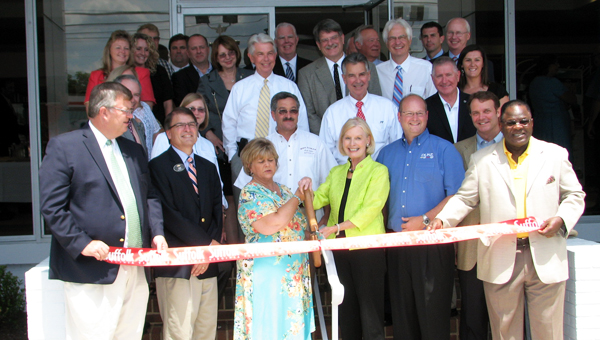 Duke Automotive celebrated a grand re-opening after many months of renovations and upgrades on Tuesday, along with more than 45 years of being in what president and dealer Lydia Duke calls “the people business.”

The dealership invested about $900,000 into improvements including a new showroom area, enhanced customer lounge, a newly designed service area and new signage outside — even down to repaving the car lot.

The business started when Lydia Duke’s father-in-law, Ray E. Duke, bought the dealership where he had worked for 10 years in January 1969. It has been in the family for going on 46 years now, more than quintupling its staff and building several new buildings, and Lydia Duke doesn’t show any signs of putting the brakes on the dealership’s success.

“This is a very special day for us,” she said Tuesday, with dozens of city officials, General Motors staff and local business partners in attendance.

Duke recalled being a schoolteacher when her husband’s death hit the company in 1989 and she took over the reins. The longtime employees who became her teachers in the months following became her angels, and there have been many since, she said.

“You can have dreams and make them work with the angels that help you,” she said.

Mayor Linda T. Johnson said she and her husband bought their first car at Duke.

“I remember it well, and I remember the service and the smiles that went along with it,” Johnson said.

But what Johnson remembers more is how Lydia Duke’s success as a woman in a traditionally masculine profession has affected her life.

“You stepped into a man’s shoes and a ‘man’s business,’” Johnson said. “You made me feel like I could do some things I never thought I could do.”

Lydia Duke said she has never stopped being in “the people business,” with the people being not only her staff and customers, but also the community as a whole.

“You can buy the same car I have for sale at any other GM dealer, but what distinguishes us is that it’s all about you before the sale, during the sale and most importantly after the sale,” she said.