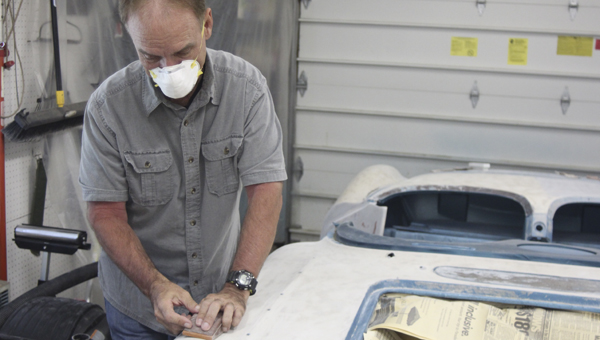 In his North Suffolk garage, Dwight Farmer works on restoring his 1959 Corvette.

Farmer retired at the end of June after 35 years of service, the last six as executive director for both organizations.

Now, a 1959 Corvette sitting in his garage beckons. Farmer purchased the car from its original owner in 1986, he said, and he plans to devote no small amount of his extra spare time to a ground-up restoration.

Eventually, the car will join his two other classic Corvettes in mint condition.

“I’m an engineer,” Farmer said. “Most of this comes fairly naturally to me. The automotive restoration is self-taught.”

If one does it himself, it takes about 1,700 hours to restore an old Corvette, Farmer said. That’s close to a year full-time, he added, but Farmer plans to “spend a little bit of time” on the project every day.

Other retirement plans? “I have a bucket list — about 28 items,” he said.

One retirement gift was a one-year membership to the Tidewater Soaring Society, and he plans to get his pilot’s license to fly sail planes.

Also on the list is travel in the U.S., Canada and overseas — including to New Zealand and the Swiss, German and Italian Alps — combining a good measure of snow skiing, something Farmer hasn’t had time for while serving as executive director for the organization.

There will also be more motorcycling on his Harley-Davidson and high-powered Kawasaki, the fastest production motorcycle available in 2012, Farmer said.

Sea level rise will be the planning district commission’s biggest challenge for the next 50 years, Farmer said. The second-biggest, he said, will be shrinking defense budgets.

For the transportation planning organization, Farmer pointed to the new transportation funding that emerged from the 2013 General Assembly, trading a flat state gas tax for a tax on the wholesale price of fuel.

Former governor Bob McDonnell “was the only governor in Virginia to have led such a change, and to everyone’s surprise, it was successful,” Farmer said.

The TPO’s biggest challenge, shared with the new Hampton Roads Transportation Accountability Commission, will be spending that money wisely on “new, badly needed projects,” he said.