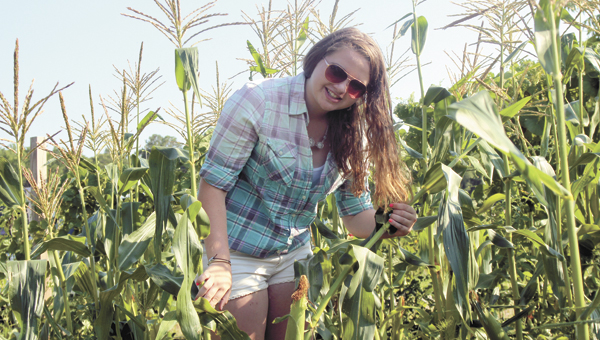 Summer Wood inspects the corn in the vegetable garden weeded by local Boy Scouts when they heard the family could use some help. Amanda Wood — Summer’s mother and the gardener of the family — has cancer.

When he walked outside his Jackson Road home to tend to his hunting dogs one recent Monday, Ron Wood chanced upon a heart-warming good deed.

At first, Wood saw people piling into cars and leaving. His initial thought: They’d been looking at the pop-up camper for sale.

“That’s when I noticed the garden,” Wood said.

“The end game is it will probably be fatal,” Ron Wood said. “Some of the drugs have stopped working.”

When she’s up to it, tending to her garden brings Amanda Wood relief from the psychological rigors of her illness.

Ron Wood tills the soil and maybe waters, he says, but his wife is the gardener of the two.

“She loves being out in the garden,” he said.

The folks who made a quick exit when Wood came outside that day weren’t interested in buying his camper. They were on a good-deed mission.

“We had been victims of drive-by gardeners,” Wood put it.

“I went inside and helped Amanda out to see her garden. Tears flowed from her eyes, and for the first time in a long time they were not the tears of pain or sadness, but of gratitude.”

His wife had been in deep pain for the previous two weeks, Wood said.

“I went out to finish my chores and choked up a bit as well,” he added. “It was exactly what we needed.”

Using social media, Wood’s daughter discovered that the drive-by gardeners were Boy Scouts from Troop 30, which meets at the Bethlehem Ruritan Club on Manning Road.

Shay is no longer such an active Boy Scout, his father explained, but the family’s connection with the troop remains.

Suffolk insurance agent Hunter March, the Troop 30 committee chairman, said Amanda Wood’s father had mentioned something about the overgrown garden to his wife.

“I said, ‘I know what that would be good for: the Boy Scouts,’” March said.

As it turned out, the Boy Scouts came to the rescue.