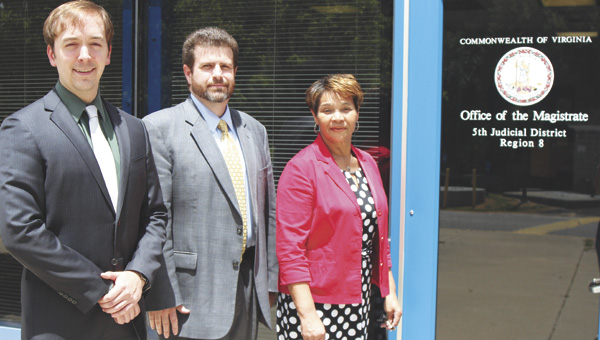 In November 1985, a woman in Silver Spring, Md., was awakened in her bedroom by a man going through her purse.

He put something “cold and hard” against the back of her head, telling her that an accomplice was elsewhere in the house.

“Turn over and you won’t get hurt,” the man said. Then he sexually assaulted her.

The allegations are contained in a search warrant filed in Suffolk Circuit Court after a Maryland cold-case investigator allegedly matched crime scene DNA with an inmate at Deerfield Correctional Center.

But the case apparently has nothing to do with Suffolk.

The drawer marked “Search Warrants” routinely contains affidavits for matters related to localities outside Suffolk but still inside the state’s fifth judicial district.

Deerfield is in Southampton County, where the sheriff’s office has a dedicated space serving as a magistrate’s office — same as the law enforcement offices in Isle of Wight County, Franklin, Smithfield and Windsor.

While magistrates don’t staff those offices around the clock, investigators can videoconference from them with Chief Magistrate Sean Dolan’s office at Western Tidewater Regional Jail, which is available to law enforcement, and the general public, 24 hours a day, every day of the year.

Copies of affidavits processed in Suffolk are filed in the Circuit Court, regardless of whether the matter has a Suffolk connection.

According to Dolan, the remit of magistrates in Virginia is broader than in many other states.

“Georgia, where I started practicing law, doesn’t have the same type of citizen access,” he said. “Here, magistrates have authority to conduct probable cause hearings for misdemeanor charges, as well as emergency custody orders and protective orders.”

Dolan gave an argument that escalates into assault and battery as an example of a misdemeanor charge a Virginia magistrate can handle. “We are not taking sides,” he said. “We are evaluating evidence to see if it reaches probable cause and charges can be provided.”

But District 5 magistrates were busiest of all with various bail processes — 10,185 of those.

Including Dolan, District 5 has eight magistrates. Bettie Faulk is the longest-serving, with 22 years. Blake Anderson, the newest, started in February in his first job out of law school.

“It’s a big responsibility,” Dolan said of heading up the team. “But I have an incredibly deep support system through the Supreme Court.”

That support, he said, comes through “regionalization” of the magistrate system. Dolan’s is one of four districts in its region, of which Virginia has eight, each with a magistrate supervisor.

In fact, as well as outlying localities in District 5, matters from any locality in the magisterial region can be processed in Suffolk.

Law enforcement in outlying localities will also visit the Suffolk Magistrate’s Office in person, instead of linking up audio-visually, Dolan said: to give an alcohol- or drug-impaired suspect an opportunity to sober up, or because no one’s available at their own office to provide the necessary security, for instance.

“The videoconference (facilities) are in secure areas within the different sheriffs’ offices and police departments,” Dolan said, “so somebody has to be there to escort them,” a service the agencies go “above and beyond” to provide.

If the Suffolk office is out of service for any reason, the outlying localities’ videoconferencing space can double as the round-the-clock magistrate’s office, Dolan said.

“No matter what — snow, storms, hurricanes — since we serve first-responders, we have to be here.”