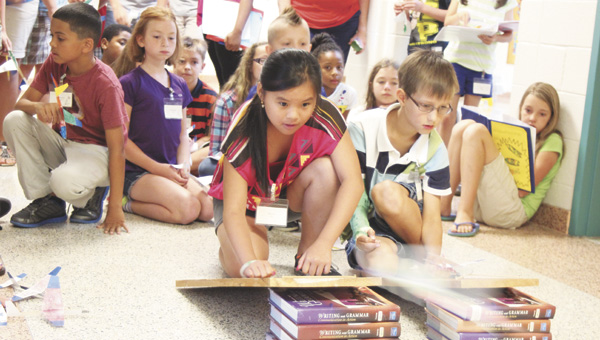 With one end of a board resting on top, stacked writing and grammar textbooks made effective launch mechanisms for new skills at King’s Fork Middle School on Wednesday.

During a session of the Tidewater Regional Governor’s School, students from Suffolk, Franklin and Isle of Wight and Southampton counties slotted their gliders onto a rubber band stretched between two screws at the top of the board.

Then they pulled them back and let them fly.

Each student had built their own glider from balsa wood, and this was their first test-flight.

The launch mechanism was meant to remove human error, according to Elizabeth Petry, coordinator of the summer school program. That way, design characteristics would be the only factors at play.

“They are going for distance,” Petry explained. “This is their first set of tests, and they will have a chance to make adjustments to their gliders to see if they can get better distance.”

About 350 applicants vied for 60 spots in the 21st Regional Governor’s School, which focused on science, technology, engineering and math skills.

Selection was based on teacher recommendations, report cards, test scores and an essay, Petry said.

The program kicked off all those years ago with a state grant that has been renewed each year.

“It’s the second year we’ve had it here in Suffolk,” Petry said. “The children come together and meet students from other school divisions who have similar interests, and they learn to work as a team with people they’ve just met.”

Other hands-on activities included parachutes, rockets and hot-air balloons, while students investigated the history of aviation and rocketry “from the Stone Age to now,” Petry said.

“They each were assigned someone of importance, and they are creating a Wall of Fame,” she added.

Back at the glider “airfield,” Isle of Wight Academy student Adia Menna observed that while the launch system was designed to remove human error, they way a glider is held before being released still influences the flight.

“You have to hold it a certain way, or else it catches your fingers,” she said.

Cooper Badoian, a rising John Yeates Middle School seventh-grader, said, “The glider basically has to be perfect in order for it to have a good flight.”

“If one wing is off,” he said, “then it will just go off” in a random direction.

“We had a kit, and we put them all together ourselves,” Dorothy said.