British strike chord on the pitch 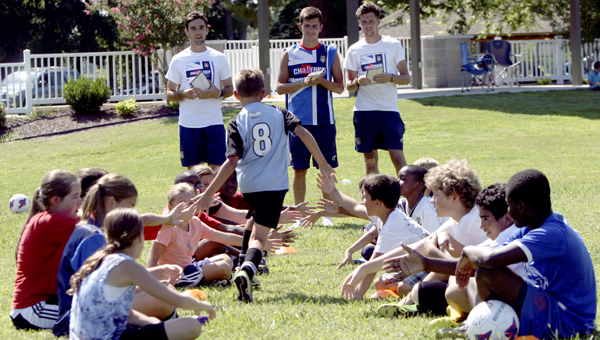 Eight-year-old Brady McCall accepts support from his fellow campers on the way to a reception with his British coaches on Friday at the end of Challenger Sports’ British Soccer Camp at Bennett’s Creek Park. Coaches, from left: Josh Pike, 20, Tom Williams, 21, and Dale Stokes, 27.

Three young coaches from England helped broaden the horizons of local youths on subjects including soccer, sportsmanship and different countries this past week during the Challenger Sports British Soccer Camp held at Bennett’s Creek Park.

Each of the coaches is in the midst of his first year coaching in America, and all three have been instructors for at least six camps so far.

Regarding the latest one they completed on Friday in Suffolk, coach Dale Stokes of Cambridge said, “I think it went well.”

The only major interruption to the week came on Thursday when the city was hit by a severe thunderstorm, that coach Tom Williams said “was insane,” likely much different from what he is used to at home in England’s town of Bristol.

But the storm did not overshadow a week in which 30 participants ranging in age from 3 to 14 took part in and seemed to enjoy what Challenger Sports’ website describes as the most popular soccer camp in the country.

“I think it was excellent,” said Dionne Manning, who watched her 7-year-old son Chase participate. “He really enjoyed it.”

Coach Josh Pike of Port Talbot, who has played professionally for the Swansea City Association Football Club, trained ages 6-9, and Williams and Stokes, both of whom have college-level experience, worked with campers ages 3-5 and 10-14, respectively.

Mandy McCall said her 8-year-old son Brady had a lot of fun, and the main appeal for him was a love for the game.

“He just likes to get out and play soccer, so just the fact that he could do that every day was enough for him,” she said.

His favorite thing about the camp was the scrimmages.

Campers were organized into teams competing in a World Cup. Teams could win the World Cup by accumulating points through their performances in games, other camp activities and their good conduct.

One of the camp activities involved some homework.

The youths were instructed to pick a country that did not make it to the World Cup.

“Then they had to share facts on that country,” Mandy McCall said.

Manning said the coaches did a great job teaching her son the proper way to do headers, and they helped him correct another part of his technique, too.

“They taught him to keep the ball really close because he had a tendency of kicking out a little farther than he should,” she said.

Eleven-year-old Matthew Dennis said he learned many things about dribbling and “a bunch of stuff about how to control my shots.”

The three coaches stayed with Matthew’s family for the week and got to enjoy a taste of Virginia’s amusements, like attending a Norfolk Tides game and visiting Kings Dominion in Doswell.

Highlighting an interesting aspect of the job, Stokes said he and his fellow coaches get to meet a diverse range of youths. They also get to adapt not only to new locations, but new co-workers, as Stokes, gesturing to Pike and Williams, said, “I only met these two on Sunday.”