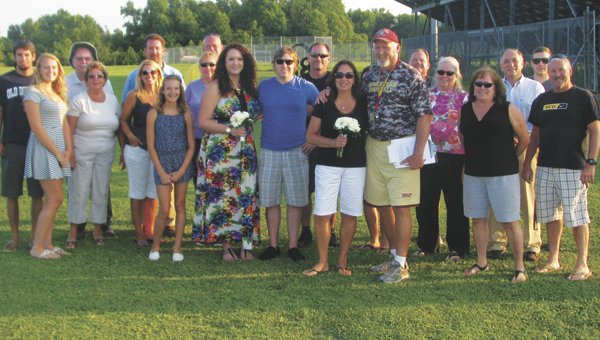 Joe and Sandy Jones and their family celebrate their vow renewal on the football field at King’s Fork High School on Tuesday. Joe Jones is the football coach at the school.

Team gets in on coach’s anniversary surprise

In the 25 years Joe and Sandy Jones have been married, football has been a constant from the day they met at a high school football game.

Even so, it came as a surprise to Sandy Jones when her husband involved an entire football team in their anniversary celebration.

Joe Jones, head coach of the King’s Fork High School football team, decided to celebrate his anniversary on Tuesday with a surprise renewal of vows assisted by the entire varsity football team. 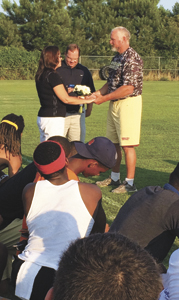 Joe and Sandy Jones renew their vows on the football field at King’s Fork High School on Tuesday. Joe Jones, the football coach at the school, got his entire team in on the ceremony.

Watched over by the school’s Fellowship of Christian Athletes preacher, Joe and Sandy Jones recommitted themselves to their marriage in the presence of family, friends and the team.

All of the players got down on one knee and hummed the “Wedding March” as the couple’s son, Bryce, a senior and member of the football team, walked his mother down the “aisle” made of teammates.

“It was great,” said Sandy, who teaches first grade at Carrsville Elementary. “And I don’t usually like surprises.”

Joe Jones masterminded the surprise for his wife. Last week, he said, he, his wife, and his family had already celebrated the upcoming milestone anniversary. However, he decided to do something different and unique to add to the celebration.

“The 25th comes along only once in a while, so I wanted to do something special,” he said. He decided on this particular expression because it was unique and it held special resonance for the couple.

“Our life has revolved around football for 25 years,” he said, “We met at a high school football game. Our first date was a Hampden-Sydney football game.”

Joe Jones has been a high school football coach for 19 years and has coached King’s Fork for the past seven. Over that time, he created a special bond with each of his players.

Ryan Kluck, a rising junior on the football team, jumped at the opportunity to do this for his coach. Kluck said that Jones went in front of the group of players after practice and said, “Guys, I’ve got some big news,” and announced his plan.

“It was fun being a part of (it),” Kluck said. “Coach Jones is a great coach and a great man.”

“I always tell my players that we’re a family,” Joe Jones explained, “What’s a better way to practice what you preach?”

Though she does not share her husband’s fanaticism about the sport, Sandy Jones says that her love for football has grown.

She joked that she would repay the surprise on the couple’s 50th anniversary.

However, she said, “Next time it might not have anything to do with football.”