Ahead of the pack 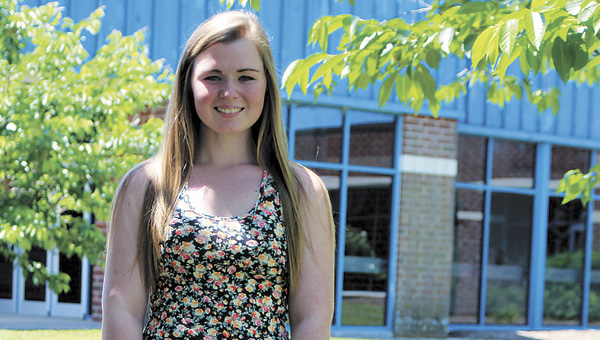 Photographed outside Lakeland High School earlier this year, when she was named valedictorian, Amanda Hamm says she saved thousands of dollars on college by taking AP classes. “Also, they give you a better preparation for college,” Hamm added.

While a senior, she took AP classes in U.S. government and politics, English and calculus.

After scoring all 4’s or 5’s, Hamm recently was named by the College Board as Suffolk Public Schools’ only AP Scholar with Distinction, awarded to those who achieve an average grade of at least 3.5 on all their AP exams, or 3 or higher on five or more of them.

“It made me feel like the hours of reading textbooks and studying was actually worth it in the long run,” Hamm, who soon will attend Virginia Tech, said in an email. “I am proud to have represented our city in academia on a national scale.”

What was it like taking such a heavy load of AP classes, interspersed with other difficult classes, like dual-enrollment?

“At times it was extremely stressful juggling the classes,” according to Hamm, though she added that her teachers, recognizing her “intense desire to do well,” helped with the juggling act.

“Staying organized was key,” she said. “I was constantly updating ‘To-Do’ lists and ensuring that I was on top of all of my assignments, not just focusing on one class.”

AP Scholars with Honor, awarded to students that receive an average grade of at least 3.25 on all AP exams and grades of 3 or higher on four or more exams, went to Melissa Lewis and Janie Raven, who joined Hamm in graduating from Lakeland this year, as well as Nansemond River High School graduates Matthew Gill, Benjamin Littlejohn and Dawn Wright.

On the advantages of advanced high school classes, Hamm is a case in point. From AP and dual-enrollment classes, she’s effectively already a sophomore at Tech, she said, after transferring 45 credits.

“Depending on the major I choose, I shouldn’t have to take any math, science or English courses, because I have already earned the required credits for these subjects,” she said. “Overall, the hard work in high school has freed up a great deal of time in the coming years for me to take classes that interest me — not just the basic courses that everyone has to take.”

That may be more important for Hamm than most other students, as she’s going in without a declared major.

She has to choose a major by the end of fall semester, and can devote her 15 credit hours until that point arrives to more new subjects of interest to her.

“At this time, like most incoming college freshmen, my feelings are extremely mixed as I prepare to pack and get ready to leave,” according to Hamm.

“I am extremely excited to start this new venture in my life, but at the same time I am nervous about coursework and social aspects of college. And, of course I am extremely sad about leaving my family in the coming weeks.”