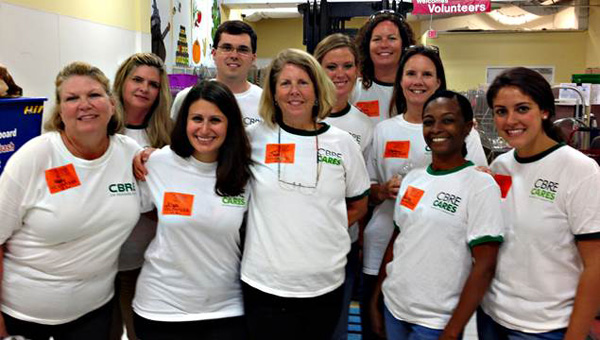 CBRE|Hampton Roads had 10 employees volunteer at the Foodbank of Southeastern Virginia and the Eastern Shore on July 23.

Employees went to the distribution warehouse on Tidewater Drive in Norfolk for a volunteer shift in the afternoon. The group helped sort through potatoes that were recently bought by the organization through donated fund.

In two hours, employees sorted and bagged approximately 1,600 pounds of potatoes, which will be distributed to hungry families throughout the community.

For more than 30 years, the Foodbank of Southeastern Virginia and the Eastern Shore has worked toward the primary mission of leading the effort to eliminate hunger in the community.

Over the years the food bank has grown in size and impact, increasing pounds of food distributed and the nutrition value of distributed food.

The food bank helps feed those who are hungry by distributing food through almost 400 partner agencies, including soup kitchens, food pantries and emergency shelters and programs like the Mobile Pantry, Kids Cafe and BackPack programs.