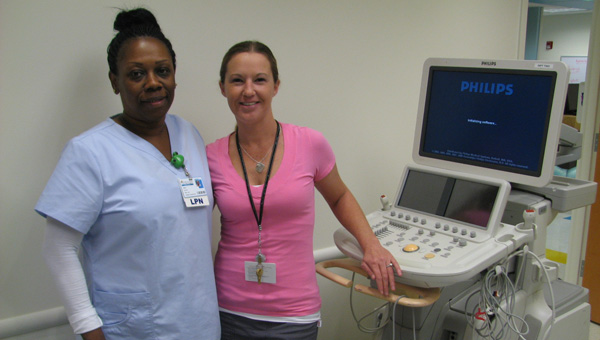 Erika Elliott, left, an LPN at CHKD’s Harbour View North, and Leslie Stratchko, a cardiac sonographer, show off a cardiac ultrasound machine at the new office on Thursday.

Families needing the services of pediatric specialists from the Children’s Hospital of the King’s Daughters health system now can get them in North Suffolk.

Patients and their families previously had to travel to Newport News, Chesapeake, Norfolk or Virginia Beach. But with the opening of the new CHKD Health Center on Harbour View Boulevard, help is closer to home.

Director Nancy Huss said the location was chosen for its central position in the area not already served by CHKD’s pediatric specialists. Not only is it more convenient for the patients, but also the majority of the physicians at the new location live nearby, she said.

“For the most part, it’s really been great,” Huss said. “The waiting room is full.”

Construction started in February, and the office opened last week. At about 6,800 square feet with room for expansion, it includes pediatric specialists in six areas — dermatology, allergy, gastroenterology, cardiology, nephrology and developmental pediatrics.

The office is furnished with equipment and staff necessary to do a number of tests, including a pulmonary function test, skin tests for allergies and cardiac ultrasounds, as well as treatments such as allergy injections and a “light box” used to treat vitiligo, the loss of skin pigment.

Huss said they expect the location to draw patients not only from Suffolk but also from Franklin, Smithfield and Carrollton. It might also attract overflow from the Newport News location from localities such as Gloucester and York, she said.

It is the 35th location for the health system, which also includes three general pediatrics offices in Suffolk — Suffolk Pediatrics, Nansemond Pediatrics and Tidewater Children’s Associates.