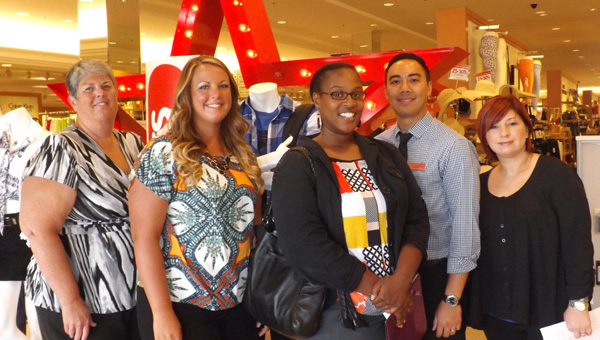 Sales manager Reggie Clemente took the teachers under his wing, according to Michele Duncan, a marketing education teacher at Nansemond River High School.

The day kicked off going over sales figures from the previous day and sales goal for the current day with department heads and the management team, Duncan said in a news release.

Then came the store meeting, attended by all employees, where the top salespeople from the day before were recognized, and a special recognition for teamwork was presented.

Next, the store goal was stated and the store opened.

Teachers toured the two-floor store, according to Duncan, going behind the scenes to look at the stockrooms, shipping and receiving areas and security operations.

“Macy’s operates with the ‘Magic of Selling’ and the teachers were able to watch a video that explained the concept and then practice role-plays that are used in training the employees,” Duncan stated.

Teachers learned the Macy’s structure — how many stores are in each district and region in each state, according to Duncan. They also learned the management structure and the potential for employees to work their way up through management.

Products and services were discussed, including the lease businesses Macy’s has in its stores.

“The criteria on how the businesses are selected were discussed,” Duncan states. “Macy’s has a few departments that are commission-based.”

Duncan and Lisa Quinn, a marketing education teacher at King’s Fork High School, looked at the training equipment used for the new employees, according to Duncan.

“It was a great experience,” she said. “We are glad that we went down there. We learned a lot about Macy’s.”