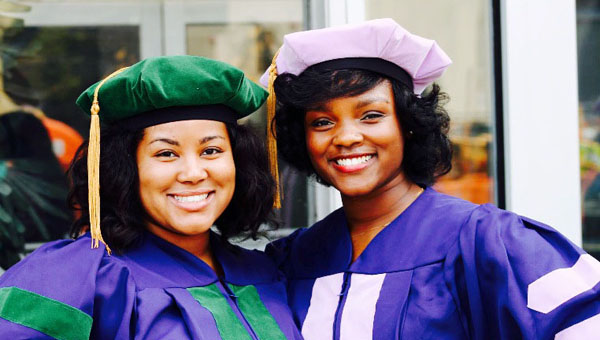 Fraternal twins LaShawndra Walker, left, and Charmaine Walker, are separated for the first time as they begin their residencies after graduating from Howard University’s colleges of medicine and dentistry, respectively.

Fraternal twins LaShawndra and Charmaine Walker have been roommates since before they were born.

They share a birthday, shared a room, shared a car and even went to the same college — Howard University — for their undergraduate and doctoral degrees, living in the same dorm rooms and apartments the entire time.

Now that the time has come for their residencies, they’re finally separated from each other at the age of 26. But it’s only a physical separation, not a spiritual one.

“I don’t think our relationship has really even changed from being apart,” LaShawndra Walker said.

“I feel like I can always call her,” Charmaine Walker said. “I just can’t see her every day.”

The two are the only children of Barbara and Sylvester Walker of Suffolk. They had an active childhood — involved in all kinds of activities including dance, gymnastics, basketball and piano lessons — and enjoyed being twins.

“I liked always having someone you can talk to,” Charmaine said. “If you needed help with something, someone’s always there.”

The two said they were able to establish separate identities in part because they don’t look very much alike. LaShawndra is more of a self-described nerd, while Charmaine admits she talks more than her sister.

“Our parents never compared us to each other,” Charmaine said. “They loved us the same amount, but in different ways.”

Their parents also stressed the importance of education and family and supported whatever the girls wanted to accomplish, LaShawndra said. So it’s no surprise they’ve been as successful as they have.

Charmaine knew she wanted to be a dentist early in life. She had a bad experience with a dentist as a child but then started seeing a different dentist, a friend of her mom’s.

“I liked the relationship she had with her patients,” Charmaine said. “Even though a lot of people hate the dentist, I think I can make a person feel comfortable.”

She said she looks forward to the “instant gratification” that awaits her in the field of dentistry.

“I can do a filling for a person, or I can do crowns, or dentures, and see my work in the smile on that person’s face,” she said. “That’s what I like about it.”

Unlike her sister, LaShawndra says she cannot pinpoint the exact moment in her youth she decided on her career. She just gradually came to realize she wanted to be a doctor, she said, and particularly a doctor for children.

“I’ve always loved children,” she said. “Even though the kids are sick, they’re resilient.”

After that’s completed, she plans to apply for a fellowship in neonatology so that she can care for premature newborns.

Though they miss each other, the sisters admit they’re relishing life on their own a bit, too. But it does have its downsides.

“I miss having a roommate, because my rent is much more now,” LaShawndra said.