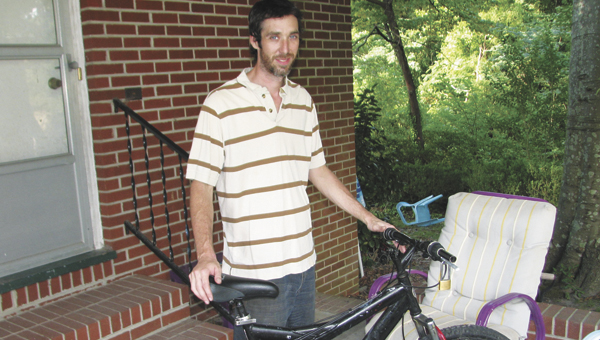 Lee Langston shows off the bicycle he got back damaged after it was stolen by local teens. He says there has been a rash of such thefts lately in his area.

Lee Langston wasn’t shocked when he returned from a recent family trip and discovered his bicycle had been stolen.

After all, it was the fourth time in five years it’s happened to him while he’s been living in the North Broad Street and Forest Hill Crescent area.

But what did surprise him was to see the thief riding Langston’s bicycle down the street in front of his house.

“They’re real brazen,” he said. “It’s like a big game. I think they dare each other to do it.”

Langston was one of the lucky ones in what he said has been a rash of bicycle thefts in the neighborhood in recent months. He got his bicycle back after tracking the thieves in his car and then calling police to let them know of the thieves’ location.

Langston said the officer gave the teens who stole the bike a lecture before calling him to come get his property.

The bike was all but ruined, though — the thieves had partially covered the red paint job with black spray paint, removed the handlebar pads and messed up the front brakes, Langston said.

Maj. Steve Patterson of the Suffolk Police Department stopped short of calling the thefts a trend in the area, citing only two reported incidents in the past couple of weeks, including the one involving Langston. In the other incident, police recovered the bicycle before the victim even realized it was missing, Patterson said.

But, he noted, there could be others that were not reported.

The theft of bicycles is a fairly common crime city-wide, he added. That’s why he encouraged folks to secure their property.

“We always encourage people to lock their residences, lock their cars,” he said. “If you’re away, let your neighbors keep a check on your house.”

“If people aren’t reporting the crimes to us, we don’t know about them,” he said. “I encourage anybody that’s had a theft to contact us. We want to provide exceptional customer service.”