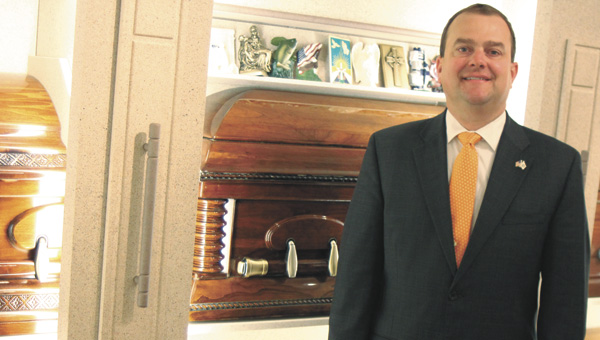 When the recession hit at the end of 2007, all kinds of industries felt the pinch. But one industry was impacted a little earlier, a Suffolk funeral director says.

Folks had already started spending less on end-of-life rituals for loved ones, according to Blake Baker.

“From merchandise to the type of funeral,” Baker said of the sections of his family’s businesses where margins tightened. “We saw it about two years before the recession really hit.”

Baker has just been elected president of the Association of Independent Funeral Homes of Virginia. The association mainly focuses on legislation affecting independent funeral homes, he said.

Baker cited two issues the association is currently taking an active interest in: Moves to change the authority to cremate, and where responsibility resides for natural unclaimed deaths.

“In Virginia, it falls in a real gray area of who’s responsible,” Baker said of the unclaimed deaths.

“In a lot of localities, it’s fallen with the sheriffs to do the legwork, but in some areas sheriffs don’t want that responsibility, so they are trying to get it changed.”

On the cremations issue, it once was — for instance — that if the deceased had five children as next of kin, permission from each was required to cremate, Baker said.

But the law has been changed so that now, permission from only one of those children is required.

Besides weighing in on such considerations, the association’s role also includes providing conferences for continuing education for funeral directors, Baker said.

According to Baker, the main client belt-tightening before the recession was a trend away from full-service funerals and toward just cremations.

“I think that has more to do with spiritual needs than financial needs,” Baker said. “People realize they need the closure.”

He says it’s about population, saying that a funeral home in Virginia Beach will do 1,500 to 2,000 calls.

As for cremations-versus-casket burials, at Baker’s downtown Suffolk location, 40 percent are cremations, he said, adding that the cremation rate is higher than that in North Suffolk but lower at the Wakefield chapel.

“Each area is so different,” Baker said. “The more transient an area is, the higher the cremation rate is.”