‘More than just an event’ 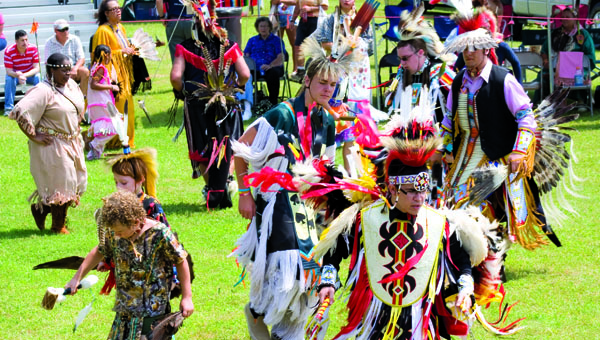 Traditional American Indian dances, music and colorful regalia are among the many sights to see at the Nansemond Indian Tribe’s powwow. The event began Saturday and continues today in Chuckatuck. (Troy Cooper photo)

Powwow unites family of all races

Hundreds of people enjoyed the drums, dancing and colorful regalia of the Nansemond Indian Tribe’s powwow on Saturday.

Continuing today from 10 a.m. to 5 p.m., the event is perhaps the biggest annual family reunion in Suffolk — and probably the only one to which the general public is invited.

Whether from the Nansemond, another tribe or no tribe at all, visitors to the powwow can take in the sights, ranging from the colorful regalia circling the sacred dance circle to the native crafts being displayed by various tribal members. A garden — although recently despoiled by deer — and a longhouse under construction can also be viewed to learn about how the Nansemond’s ancestors lived on the site until European settlers first arrived about 400 years ago.

It is for their ancestors that the Nansemonds keep the traditions alive, Earl Bass said.

“If it weren’t for them, we wouldn’t be here,” he said. “The things that they went through to get us to the position we’re in right now … they ended up being slaves on their own land.”

But the powwow also is for the future generations. Earl Bass’ son, Eric, said he has been attending the powwows since he was a baby, and now his own children come to the powwow.

One final purpose of the powwow — to raise money for the tribe’s Mattanock Town project, which aims to create an authentic, working village on the site as well as educational displays and more. The tribe is doing its own food this year, rather than having food trucks come in, to raise more money than it would otherwise be able to.

“We felt like we could make money and do it cheaper,” Earl Bass said.

Chief Barry Bass held court under the shade of a tree for the day, greeting tribal members and all others with the same smile.

Other members of the Nansemond tribe traveled from points across the country to be in attendance.

“I’m very proud to be from this tribe,” said Susan Pope, who lives in Georgia. “It’s a celebration of our tribe. It’s our heritage.”

Michelle Kellum, a Nansemond from Elizabeth City, N.C., said the powwow is “a spiritual gathering where we can show people our heritage.”

She also lauded the new audience dance, which gave spectators a chance to enter the sacred circle and try their hand at dancing to the drumbeat.

“It’s a lot better for the crowd,” she said.

Lee Lockamy, who lives in Virginia Beach, said the powwow is “more than just an event.”

“It’s a special feeling out here, unlike at other powwows,” he said. He also noted it is important to have the support of the Chuckatuck community and the city’s Department of Parks and Recreation, which co-sponsors the event.

Members of other tribes also support the powwow wholeheartedly.

Spectators at Saturday’s event included relatives Vicky, Virginia and Tina Campbell. They are new to Virginia, having moved from New Jersey.

“We used to go to the powwows in Jersey all the time,” Vicky Campbell said. She said the women were enjoying themselves so far.

Sunday’s celebration will take place from 10 a.m. to 5 p.m. at Mattanock Town, at the end of Pembroke Lane, which runs off Godwin Boulevard directly across from Oakland Elementary School.