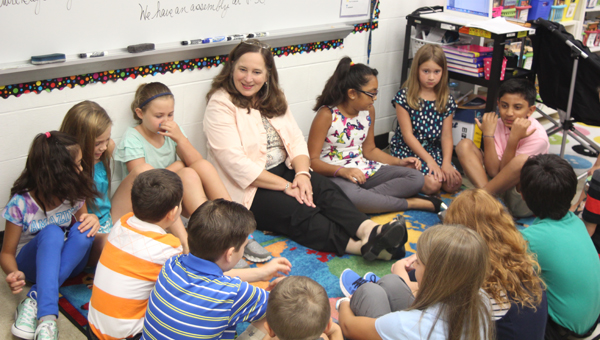 During Nansemond-Suffolk Academy’s first day back for 2014-2015 on Wednesday, fourth-grade teacher Maryanne Persons gets to know her young charges.

Excitement was running high at Nansemond-Suffolk Academy on Wednesday as Saints marched back to their classrooms for the new school year.

“We are very excited to have all or our students back,” said Karen Schompert, school spokeswoman. “We have a lot of exciting things coming up.”

It was a “normal day of classes” for kindergarten through 12th grade, Schompert said, while the pre-K program was to start Thursday.

The school band provided a rousing soundtrack as parents arrived with children. Ugochi Ofole, with daughter Zara Ofole, was one of many parents arriving at NSA for the first time.

“I’m happy she’s starting,” Ugochi Ofole said. “The kids are so happy. We are looking forward to it, actually.”

Members of the Rana family were also first-timers. Ghias and Muniba Rana arrived with their daughter Inayha, who enters the first grade.

According to Schompert, NSA has more new students beginning this year than it has since 2008.

While children were introduced to their new teachers, many parents headed to the Lower School library, where they got to know each other over coffee and doughnuts.

“It’s for them to get to know some of the administrators and get to know each other, and just to build a sense of community,” Schompert said.

“For some people, it may be their first time here, and it’s always nice to be welcomed — that’s the idea behind the event.”

Head of School Debbie Russell, who stood outside greeting families, said the first day back is “the best day of the year.”

“It’s quiet all summer long, and then when they come back, they just bring the life and excitement into the school,” she said.

“We’ve got a lot of exciting things planned.”

In Maryanne Persons’ fourth-grade classroom, the annual ritual of classmates getting to know one another — and their teacher — was soon underway.

“We’ll start our day with interviewing each other,” Persons said.

Persons was also planning to take her class to meet Lower School head Nancy Webb, which would be followed by a morning meeting.

“We come together and all stand in a circle and we’ll do a greeting,” Persons said.

It’s the first time the children get a “big binder with all the subjects in it,” she said, and the students were to spend some time organizing their binders.