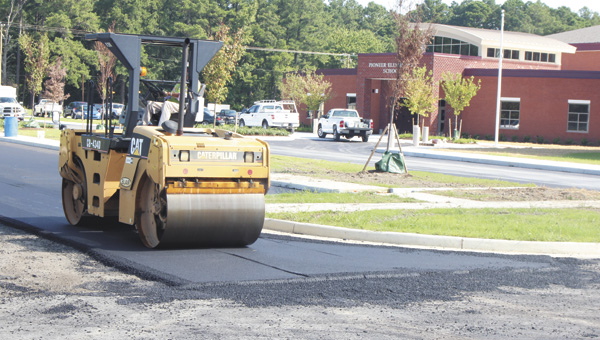 A worker paves the driveway into Pioneer Elementary School earlier this week. The school is preparing to open for the first day of school on Sept. 2, with teachers due to move in Monday.

Almost 14 months after ground was broken, teachers are due to move into Suffolk’s newest school Monday.

At the facility on Holland Road on Wednesday, workers on the second floor were busy moving furniture into classrooms.

On each door, a list told them exactly what furniture was needed. Elsewhere in the building and on the campus, scores more men and women were hammering, painting, laying asphalt and performing countless other tasks.

“What we are trying to do is get the classroom floors finished so we can put furniture in, then come back and do the main traffic hallways and things,” said Susan Redmon, who has managed the construction contract.

Redmon, on her fifth new school, said she has been at Pioneer Elementary all week.

“I don’t get stressed about it anymore — it’s construction,” she said. “You are always going to have things come up at the last minute. You just deal with it — there’s always a solution.”

The project will be delivered within its $18.5-million budget, Redmon said. That figure includes $17.5 for construction and $1 million for furnishings and technology that the School Board has reallocated.

The reallocated funds were from a now-on-hold project to move the school district’s administrative headquarters from the corner of North Main and East Washington streets to the Human Resources building on Market Street.

“We haven’t spent all of that yet,” Redmon said. “We were trying to be conservative — we always have last-minute needs.”

By the numbers, the new school is being outfitted with 770 student desks, 1,200 students chairs and 35 kidney-shaped tables — and that, of course, is just to mention a few items.

“They have done a great job,” Napier said. “The kids deserve this, and it’s here.”

At last week’s School Board meeting, board member Linda Bouchard said that engraved bricks for Pioneer Elementary are still being sold to raise money for the Suffolk Education Foundation.

The bricks have already been laid around the flagpole at the front of the schools, but additional bricks will be placed elsewhere on the school’s patio.

Purple and silver will be the new school’s colors, according to district Superintendent Deran Whitney, and its mascot will be the mustang.