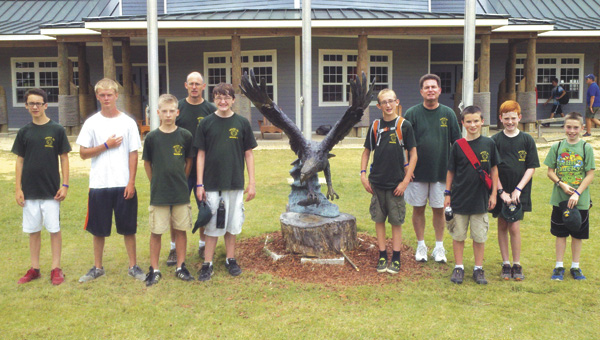 Members of a Chuckatuck-based Boy Scout troop learned outdoor skills and met Scouts from other parts of the country during summer camp.

Scouts of Troop 25, chartered to the Chuckatuck Ruritan Club and which meets at the Chuckatuck Volunteer Fire Department, visited the Bayport Scout Reservation.

The 300-acre reservation, on the southern bank of the Rappahannock River, is run by the Colonial Virginia Council of the Boy Scouts of America, which Troop 25 is a part of.

“These Merit Badges earned will help each Scout in the pursuit of their Eagle Scout Rank,” Assistant Scoutmaster Mike Van Straten stated.

Troop 25 boys had the opportunity to meet Scouts from Western Massachusetts Council, National Capital Area Council, Mason-Dixon Council (western Maryland and southern Pennsylvania), as well as Scouts from their own council.

“It is always good to work, learn and experience new things with Scouts from other places,” according to Van Straten.

Troop 25 has an active schedule, Van Straten says, with a program focused on getting into the outdoors to camp, canoe, backpack and hike. Recent outings have included Merchant Millpond State Park, Medoc Mountain State Park and Fort Boykin.

“Trips are being planned this fall to backpack in the Blue Ridge Mountains, camp at Sherando Lake in the Jefferson National Forests, and to canoe the Back Bay, camping at False Cape State Park,” Van Straten states.

“These events offer the Scouts practical learning experiences, putting knowledge gained to use and allowing young leaders to test themselves.”

It’s about teaching Scouts the importance of giving back while also having fun, according to Van Straten.

Boys 11 years old or who have completed the fifth grade and are at least 10 years old are welcome to join Troop 25, Van Starten stated. It meets Tuesdays at 7 p.m. during the school year at the fire department building, 300 Kings Highway.