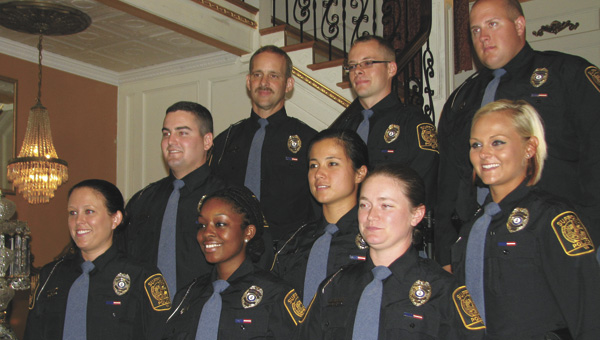 “You came to a great city, a city that has put safety as a top priority,” Brown told the officers.

He also congratulated the officers on their choice of career and encouraged them to advance, pointing to Patterson and Smith as examples.

Roberts thanked the officers for giving their talents to the career of law enforcement and to Suffolk.

“This is a tremendous gift that you gave to the city of Suffolk,” Roberts said. “We’re very proud you have chosen Suffolk to do your work.”

Patterson gave the recruits what has become the standard advice from the department’s leaders at such ceremonies: Be honest; Learn from your mistakes; Find mentors within the department.

“We expect the truth from you,” Patterson said. “Don’t make the same mistake twice. Finally, find some mentors. Surround yourself with people that are going to help you.”

“I’m certain they will serve the city of Suffolk with honesty and integrity,” Maj. Smith said.